Professor Jaafar Elmirghani, (School of Electronic and Electrical Engineering) has been awarded the GreenTouch 1000x award for his work in reducing Internet online energy consumption. 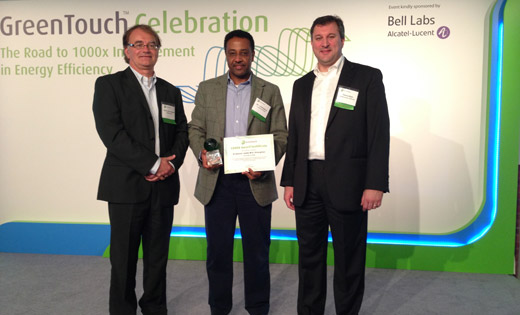 The award is given to an individual who contributes to the "leadership in the creation, organization and promotion of the GreenTouch consortium and pioneering research contributions to the field of energy efficiency in telecommunications".

Professor Elmirghani is leading the EPSRC £6m INTelligent Energy awaRe NETworks (INTERNET) programme grant, 2010-2016, a collaboration between the Universities of Leeds and Cambridge and a number of industrial companies including, Avago, BBC, Broadcom, BT, Cisco, Ericsson and Oclaro.

Professor Elmirghani received the award in recognition of the new network architectures, protocols and hardware techniques he and his team introduced to the core network, the central wired part of the Internet. These led to an energy efficiency improvement in the core network of 316x, more than the level required to achieve 1000x energy efficiency improvement in the overall wired and wireless network.

Professor Elmirghani said “I am delighted that our research in the INTERNET project has won this international award in competition with the world leading players in the field, a tribute to the innovation introduced by the INTERNET programme grant and by my colleagues.”

Professor Ian Robertson, Head of the School of Electronic and Electrical Engineering, said “I am delighted that Professor Elmirghani’s outstanding research into energy efficient networks has again been recognised by one of the world’s leading technical societies. This is another example of how the research in the School can deliver real impact, with influence on standards and uptake by industry. Building on his Institute of Electrical and Electronics Engineers (IEEE) ComSoc Outstanding Service Award, and his role as IEEE Distinguished Lecturer, this GreenTouch award confirms that Professor Elmirghani’s research is recognised by the community to be of the very highest calibre.”