Technical drawings featuring a camera, projector and other film apparatus are part of a new archive of material belonging to the ‘Father of Cinematography’ on permanent loan to the University. 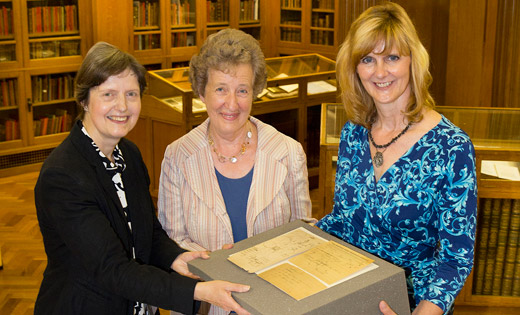 The materials which belonged to Louis Le Prince are to become part of the Leeds Philosphical and Literary Society’s archives, which are held in the University’s Special Collections.

It was on Leeds Bridge and Roundhay Park Gardens that le Prince used a single-lens camera to film the world’s first moving pictures in 1888 – several years before other inventors, including Thomas Edison and the Lumiere brothers. At the time he was a member of the Leeds Philosophical and Literary Society (LPLS).

Le Prince was never able to bring his invention to the public notice or claim credit for it, as he vanished in 1890 after apparently boarding a train from Dijon to Paris. Various theories including suicide and murder have been put forward but the true story remains a mystery. After his disappearance, Thomas Edison claimed credit for the invention of the cinematography. Although the claim was successfully disputed by le Prince’s family, until recently his achievements have been largely unrecognised.

Le Prince’s great-great-granddaughter, Laurie Snyder agreed to bring his remaining archive to Leeds from her home in Memphis, USA, at the suggestion of Leeds-born film-maker and le Prince expert David Wilkinson. The donation of the archive coincided with the release of his documentary about le Prince’s life – The First Film.

Laurie herself works for the University of Memphis and has a keen understanding of the importance of making archive material accessible to a wide audience. “I’ve worked in museums for years and understand archives, so I knew that these materials needed to be somewhere where they’d be accessible to people who want to research le Prince. I really hope that the film will spark an interest in him and that people will take a fresh look at the materials in his archive. The drawings showing the mechanisms of the camera, for instance; I’m sure that someone with an understanding of technology may see something about his process that no-one else has interpreted before.”

The President of the LPLS, Professor Joyce Hill, accepted the donation of the archive on behalf of the Society at an event in the Brotherton Room. Joyce says: “We’re absolutely delighted that Laurie agreed to give us this archive and are thrilled that Special Collections share our excitement. These unique, world-quality materials will form part of the Society’s larger archive which is kept here at the University. It means they will be kept under professional archive conditions and will be publicly available under appropriately controlled conditions. Together with Special Collections, we are also hoping to digitise le Prince’s archive collection to bring it to an even wider audience.”

The First Film received at gala showing at the Hyde Park Picture House in Leeds, and the documentary is now on general release and is featuring in several European film festivals this year. More about the film can be found at Guerilla Films and at the First Film.

For information about the Leeds Philosophical and Literary Society, one of the oldest civic societies in Leeds, visit their website.