It has 50,000 bees living in hives on the roof; it has more than 900 new study places connected to superfast broadband; it has 150,000 books – with hundreds of thousands more available online. 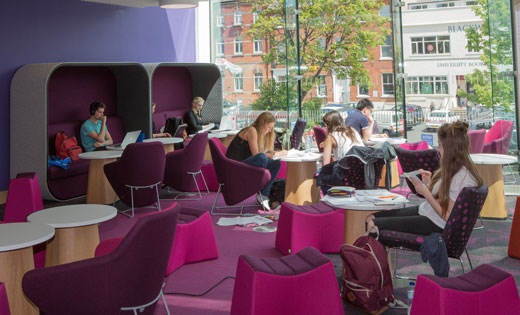 Speaking at the official opening of the £26m Laidlaw Library, Chancellor Melvyn Bragg described it as a landmark moment in the development of the University: “Architecturally it forms a stunning new entrance to our campus, educationally it provides the stimulating and flexible space needed for current and future generations of students.”

It meets a real need. As student numbers have grown to the current figure of over 31,000 students and learning technologies have developed, the existing campus libraries have each been extended and refurbished, but the opening of the Laidlaw Library provides a purpose-built space to meet these growing needs.

Lord Bragg added: “I’ve watched with fascination as the new library has risen from its foundations and taken form, beautifully clad in Portland Stone. Its design is in harmony with the iconic Parkinson Building, its facilities utterly in tune with the demands of modern study.”

He drew parallels with earlier developments of the institution: “The Brotherton Library, with its breathtaking domed reading room, inspired post-war generations. The Edward Boyle Library, with its brutalist design, provided cutting-edge facilities for a new generation. The Laidlaw Library will make an equally profound impression on the students of the future.”

The library, close to the University entrance on Woodhouse Lane, is named after Irvine Laidlaw, who studied economics at Leeds in the 1960s, and whose £9m gift for the project is the biggest ever received by the University. Lord Laidlaw explained that his gift had its roots in his own time as a student: “I look back on my time at Leeds with great fondness and remain acutely aware that my university experience provided a critical foundation for my future life. It gives me enormous pleasure to have been able to support the development of this beautiful new library, which will provide a stimulating and enjoyable learning environment for generations of students to come.”

His name is one of 2,300 which appear on the donor wall inside the entrance, honouring all those alumni and other supporters who contributed, including the Garfield Weston Foundation and Wolfson Foundation which have each made significant gifts to the project.

Thanking all the donors for their support, Vice-Chancellor Sir Alan Langlands said: “Philanthropy has supported excellence and opportunity at Leeds since Victorian times. Those 2,300 people whose names appear on the donor wall are following in a proud tradition of individual generosity which is greatly appreciated by the students and staff of the University.

“This magnificent new library offers our students an inspirational place to work – whether they are seeking a quiet spot for reading and study or a dedicated space for preparing group projects and presentations. It will also energise young people even before they come to university, with the community classroom providing a splendid new space for the University’s educational outreach.”

Work has now begun on a thorough refurbishment of the Edward Boyle Library, to be carried out in two halves, ensuring that the facility remains open throughout. The finished building is due to open in September 2017. Building works are also under way for a £1.9m new Treasures of the Brotherton gallery in the Parkinson Building which will display some of the rare books and manuscripts held in the Brotherton Library.

Watch the Laidlaw Library's journey from drawing board to campus landmark.