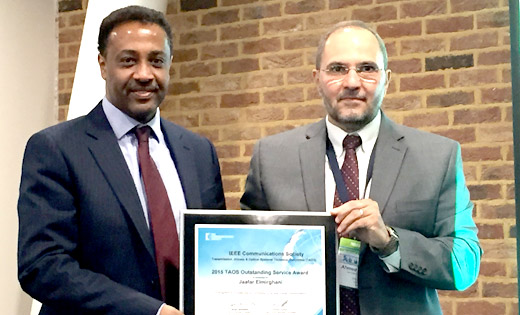 Professor Elmirghani received the Award for his leadership and contribution to research in the area of green communications.

Professor Elmirghani, Director of the University’s Institute for Integrated Information Systems, is leading the £6m EPSRC INTelligent Energy awaRe NETworks (INTERNET) research programme, which focuses on green communications.  The programme is a collaboration between the Universities of Leeds and Cambridge and involves over 15 leading international industrial players in green communications, including Alcatel-Lucent, BT, the BBC, and Cisco.

He also chairs the GreenTouch Wired, Core and Access Networks (WCAN) working group, one of two technical committees in GreenTouch, the world premier industry-academia research consortium with over 50 member organisations.

His technical contributions, and those of his colleagues in Leeds, have been recognised through a number of international awards including the IEEE Communications Society ICC 2013 best paper award, and industry awards including the prestigious Telecoms.com 2014 award presented to GreenTouch.

Prof. Elmirghani said: “I am delighted to receive this honour and would like to recognise my colleagues and the funding received from EPSRC which made this possible”.

Professor Ian Robertson, Head of the School of Electronic and Electrical Engineering said: “I am really pleased that Jaafar’s tremendous contribution to research into energy-efficient communications networks has been recognised with this prestigious award. His research was a major component of the portfolio of outputs that we submitted to the Research Excellence Framework in 2014, in which Leeds was ranked alongside Cambridge, Oxford and Imperial College for the quality of research. The award reflects the fact that 100% of our research was rated world leading or internationally excellent.”