A Leeds Professor has been awarded the prestigious George Gray Medal, making him the first person to receive all four of the British Liquid Crystal Society's (BLCS) awards. 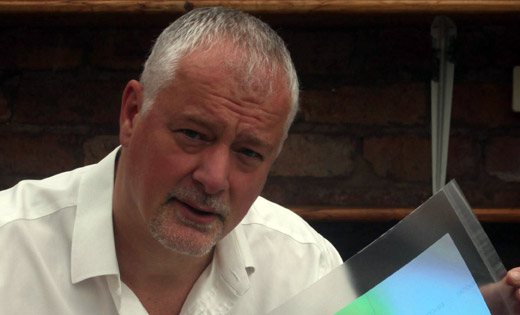 Professor Cliff Jones (School of Physics and Astronomy) was presented with the medal at this year's British Liquid Crystal Conference at Sheffield Hallam University. This is the society’s highest award, and is named after Professor George Gray, Kyoto Prize winner and the father of modern liquid crystals whose accomplishments include the synthesis of the first room temperature materials in the early 1970s that enabled the display industry to take off.

The award is given to a scientist for seminal research contributions of international quality. Professor Jones’s citation was for his early work on ferroelectric liquid crystals and their use in television displays, the invention of the zenithal bistable display and founding of the company ZBD Displays Ltd (now Displaydata).

The award was presented by Professor Peter Raynes FRS. In his introductory remarks, Professor Raynes noted that Professor Jones is the first recipient of all of the awards from the society, including the Ben Sturgeon Award in 1992, BLCS Young Scientist Award in 1994 and the Cyril Hilsum Medal in 2006.

In the presentation that followed, Professor Jones paid tribute to the scientists with whom he has worked throughout the different stages of his career. These included his PhD supervisor George Gray himself, and also Professor Helen Gleeson and Dr. Mamatha Nagaraj from Leeds.