Two Leeds academics, together with a team of scientists from the universities of Sheffield, Aberystwyth and Bristol will receive funding from the NERC to further understanding of climate change.

Icesheets are far from the pristine white that people might think. Credit: Chris Bellas, University of Bristol 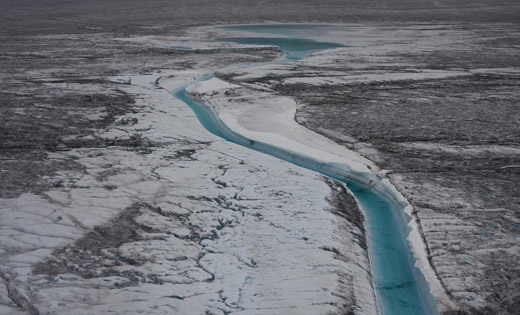 NERC is investing £8.5m in three projects as part of its large grants scheme, designed to support ambitious, large-scale and complex research, which has the potential to deliver major international breakthrough. The evidence the projects provide will cast light on some of the big scientific unknowns in this area, and better equip society to understand the challenges of climate change.

Among these is a more than £2.4m funded project lead by Professor Martyn Tranter, from the University of Bristol. The main aims of the project called Black and Bloom is to investigate the causes of accelerated melting of the Greenland ice sheet.

The team, including Professor Liane G. Benning and Associate Professor Jim McQuaid from the University's School of Earth and Environment, will look specifically at whether and how melting is triggering the growth of microbes, soot or mineral dust that all darken the surface of the ice sheet. Darker surfaces absorb more sunlight, and this may be causing the ice to melt more quickly. Understanding the causes of melting will help to predict how the ice sheet might evolve as the climate changes, informing predictions of future sea-level rise.

“We are really excited about this new project. It not just follows on from our previous work on the effect of coloured algal blooms on snow and ice but for the first time we will be able to span scale by cross-correlating observations from the small scale of a microbe, a dust or a soot particle all the way to large scale satellite data and better understand and model the accelerated rates of melting observed in Greenland and predict how much sea level rise will occur in the future” said Liane.

NERC's chief executive, Professor Duncan Wingham, said: “Although much of the fundamental science of climate change is well established, many important questions remain about how it will unfold. These investments will help to address key gaps in our knowledge, and will ultimately leave society better equipped to confront the challenges ahead.”