The University’s Security Operations Manager and acting Head of Security has been recognised in the Queen’s Birthday Honours List. 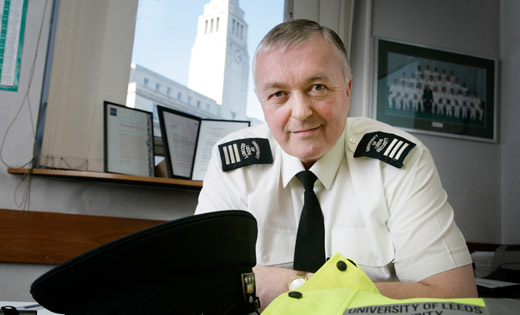 Malcolm Dawson will receive a British Empire Medal for services to higher education and students. Reintroduced in 2012, the BEM rewards individuals who have contributed innovative, high-impact work.

On receiving a letter announcing his award from the cabinet, Malcolm said: “It’s not every day you receive a letter from the Prime Minister. I read it with total shock, disbelief and huge, huge pride. I was so overwhelmed.”

Malcolm’s 25 year employment with the University has involved joining forces with West Yorkshire Police, working with the public to reduce noise in residential streets and liaising with the bereaved. Malcolm has been a finalist on several occasions in the national Security Excellence Awards and has received a Vice-Chancellor’s Health and Safety award in 2012.

Malcolm said: “My passion is the safety of staff, students and visitors, as well as enhancing the customer experience. The work that the whole team do in reducing the fear of crime on campus and in halls is superb, as we try to make Leeds as safe as possible. This recognition is credit to the team as a whole.”

The Queen’s Birthday Honours List, published on Saturday 13 June, recognises the achievements of a wide range of extraordinary people right across the UK.

A ceremony will take place later in the summer, where Malcolm will be presented with his medal. In the next 12 months he will also be invited to attend a ceremony at Buckingham Palace with fellow recipients of Birthday Honours.

He said: “After all these years I’ve still got a passion and desire to carry on my work for the foreseeable future.”

The University is also delighted to learn that Roger Marsh has been awarded an OBE in this year's Birthday Honours, for services to business and the economy. Roger is a Leeds alumnus and currently serves as a member of the University Council, the institution's governing body.