Leeds research on show at the Royal Society

Leeds School of Geography research into the vanishing glaciers of Everest will be on display at the Royal Society Summer Science Exhibition this year.

Khumbu Glacier in Nepal is the highest glacier on Earth, flowing from the southern slopes of Mount Everest through the icefall seen here from Everest Base Camp (photo: Matt Westoby) 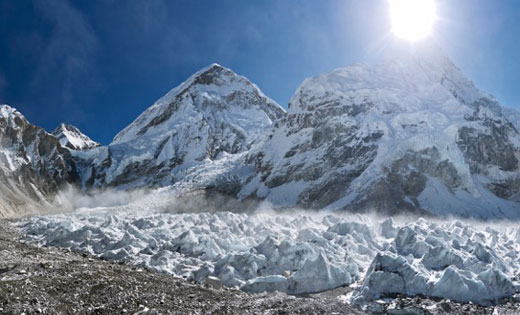 A cross-institutional team, including researchers from the Universities of Sheffield, Aberystwyth, Northumbria and Hertfordshire, is building an exhibit that focuses on how glaciers around the world’s highest mountain (Mt. Everest, 8848m), are rapidly shrinking. Using striking photographs and video footage from expeditions to the Khumbu, Imja, Lhotse and Ngozumpa Glaciers in Nepal, combined with hands-on experiments and 3-D models, the team will explain how glaciers in the Himalaya are responding to climate change and why this is important for humanity.

The team members include a mix of academic staff and postgraduates, all of whom are interested in the state and fate of glaciers in the Himalaya.  The research is being led by Dr Ann Rowan and others from the Ice and Climate research group at the University of Sheffield.  Leeds is represented by Dr Duncan Quincey and students Owen King and Scott Watson from the School of Geography.

Dr Quincey says: "The way these glaciers respond to climate change is concerning because the meltwater that they produce is of importance to so many people living downstream. By collecting field measurements of glacier melt rates and combining them with satellite image analyses spanning the last thirty years we can make predictions, using computer models, about how much meltwater the glaciers will provide in coming decades, and when the glaciers will vanish."

Also joining the team at the Royal Society Summer Science exhibition are David Breashears from Glacierworks, a renowned American mountaineer and filmmaker who has reached the summit of Everest four times, and Mollie Hughes, one of the youngest British climbers to do so.  David and Mollie are both concerned with the future of this spectacular mountain environment and keen to talk to the public about the experience and dangers of standing on the top of the world.

The team will be keeping exhibition visitors updated about glacier-related news from the Everest region, and about when visitors can meet the mountaineers David and Mollie, using Twitter (@EverestRSSSE) and Facebook (facebook.com/EverestRSSSE).

The Natural Environment Research Council, the Climate Change Consortium of Wales, the Quaternary Research Association and the five Universities involved are sponsoring the exhibit.