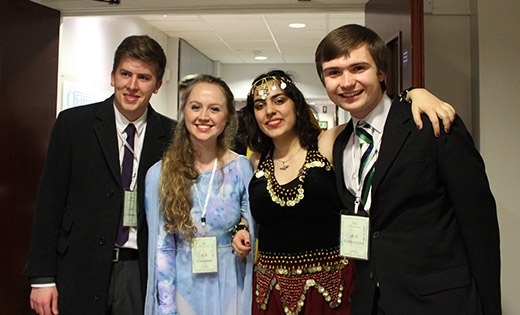 Around 30 candidates from 15 British universities took part in the competition for non-Chinese university students.  The contest has three components - a short speech, a demonstration of Chinese language proficiency and knowledge of China, and a three-minute artistic performance.

The four Leeds students won over the audience with their humorous speeches and fantastic performances: they sang, played the violin, and performed Chinese dances.  You can see pictures of the four in action on the LUBS website.

Their confident performances also caught the attention of several audience members. The Minister Councillor of Commerce (China) and the head of the Bank of China's UK Branch indicated that they would be happy to consider the students for future internships or employment opportunities, demonstrating the value of Chinese language skills and cultural knowledge for students' career prospects.

Vice-Chancellor Sir Alan Langlands says: “The students concerned and their teachers are a great credit to the University.”

Contestant Matthew O’Dowd says: “The best think about taking part in the competition was the incredible help and support given by our teachers at the Confucius Institute and in the East Asian Studies Department. They really did work hard for us and I hope they don’t feel too exhausted!”