Around the world in 80 minutes

Schoolchildren from three Leeds primary schools were invited on a cultural whistle-stop tour of campus during this year’s World Unite Festival.

Pupils at Tranmere Park with the Intercultural Ambassadors 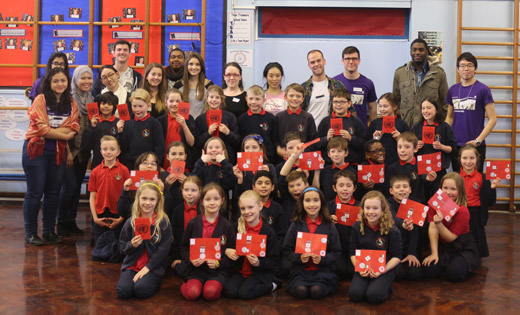 ‘Around the World in 80 Minutes’ was organised by the University’s Intercultural Ambassadors and volunteers from student societies to get schoolchildren thinking about different countries and cultures.

The on-campus visit featured three different countries and snacks from around the world in different rooms across campus, followed by a cultural performance organised by Leeds University Union. Students from GhSoc (Ghana Society) held a mask-making workshop in one room; another room represented Pakistan, and included a quiz and a writing workshop where children could learn to write their names in Urdu. Students in the Japanese society performed and taught a native dance to the schoolchildren in the afternoon.

The volunteers also went into Gildersome, Tranmere Park and Hugh Gaitskell Primary Schools, and ran workshops based around their home countries: Mexico, Italy, China and Kenya.  At the Italian workshop, children could practice speaking Italian phrases; the Kenyan workshop had games native to their own country and spoke about their culture with interactive photos and videos; the Chinese society taught a native dance; and the Mexican workshop decorated traditional skull masks.

To get the children thinking and stimulated, they were all given passports and received a stamp once they had visited a ‘country’ and had written a fact or something new they had learnt about the culture.

The aim of the project was to raise awareness of diversity and cultural understanding in a fun, educational way and to get schoolchildren to consider a future in higher education.

All the schools involved gave the project positive feedback, saying it had a beneficial impact on the local communities, and the student volunteers felt the project enhanced their personal and professional development.