The University of Leeds is backing a bid for Leeds to be the 2023 European Capital of Culture. 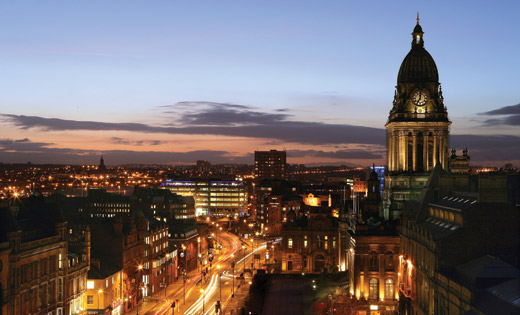 If it wins the bid, Leeds will host a year-long programme of cultural events to showcase the cultural excellence of the city, broaden access to culture for its citizens, and act as a catalyst for economic and social development.

Sir Alan Langlands, Vice-Chancellor of the University of Leeds, said: “We will do all that we can to support Leeds’ bid to secure European Capital of Culture status for 2023. Success would mean a huge boost to the outstanding cultural and artistic activities our city already enjoys.

“It would also bring wider economic benefits and significant new opportunities for our staff and students who already work closely with the cultural and creative industries. The University of Leeds plays an important part in the cultural life of the city and we are proud to be the principal academic partner in this bid.”

The process of bidding could help build an international image of 21st century Leeds in Europe and beyond; a vital, creative, ‘can-do’ city for future generations with an associated increase in jobs, skills, technological and business capacity.

The city of Liverpool saw a £753.8 million boost to the economy and a 34% rise in visitors to the city after it was made the 2008 European Capital of Culture.

Leeds City Council’s executive board backed the bid at a meeting held today.

Councillor Keith Wakefield, leader of Leeds City Council, said: “The Tour de France last year showed what we can achieve as a city when residents, communities, groups, organisations and partners all come together to play a massive part in a real once in a generation opportunity and event, and I am confident that this can be replicated through our 2023 European Capital of Culture bid.

“If it is to be successful, I believe it is absolutely vital that the bid comes right from the heart and fabric of the city and it must be both transformational and long lasting in its impact for all of our residents and communities. This is both a massive challenge and opportunity, and we are looking forward as a council to playing our part in making these ambitions a reality in a true one Leeds, one vision bid.”

The city will have to declare its intention to bid by December 2016. The successful city will be announced in October 2018.