Striking images illustrating Leeds research into the Muslim Hajj pilgrimage are to feature in the Arts and Humanities Research Council's 2015 image gallery. 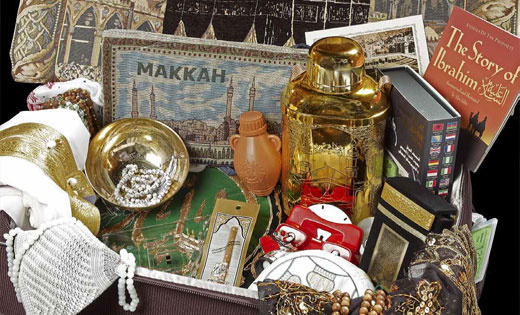 The images illustrate the modern, British experience of the annual Muslim pilgrimage to Mecca: the subject of research by Dr Sean McLoughlin of the School of Philosophy, Religion and the History of Science. As part of his research, as well as conducting interviews with pilgrims, tour operators, community organisations and government authorities, Dr McLoughlin collected objects and photographs which helped to tell their Hajj stories.

The images will range from tour operator’s brochures and welfare/governance advice leaflets, artists’ representations of Mecca, British Muslim pilgrim-tourists’ own photos, and the ‘stuff’ of pilgrimage paraphernalia and souvenirs.

You can see some of the images now as they feature in an online exhibition of interview recordings and images, created by Dr McLoughlin with the support of the 'Creative Labs' run by the Leeds Cultural and Creative Industries Exchange.

Dr McLoughlin was one of only 10 out of a total of over 60 applicants to be awarded a place in the AHRC's 10th Anniversary Image Gallery.  Launched in 2013, the Image Gallery aims to explore and celebrate the wide variety of ways in which images are generated and used by arts and humanities research projects.  The 2015 Image Gallery will be launched on the AHRC website in March and images will be added to the Gallery throughout the year.