Two final year students were invited down to Westminster to show their work at the third annual Posters in Parliament competition. 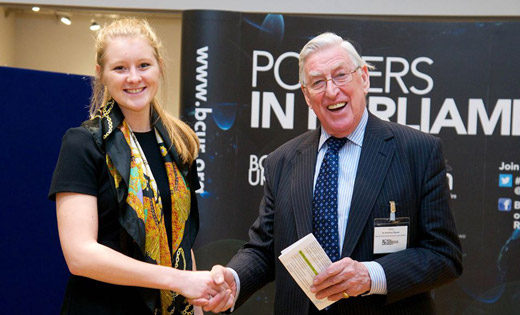 Lucinda McGregor (Meteorology & Climate Science) and Emma Simpson (International Relations) presented their research posters in the Houses of Parliament alongside 44 other undergraduate submissions.

This vibrant event showcases some of the best undergraduate research from selected universities across the country, with students presenting research posters to invited guests, including many MPs, as well as undergoing a rigorous round of questions from a judging panel including:

Emma explored the title “Trafficking the exotic: damaging representations of women of colour in the sex industry” which addressed the stereotype concerning the “exotic” or “animalistic” sexual behaviour of women of colour which goes on to increase their vulnerability to sex trafficking.

The Posters in Parliament event is organised as part of the British Conference of Undergraduate Research (BCUR) and awards prizes to the two best posters. This year, however, the judges awarded a third prize to Lucinda.

The students spent a lot of time talking to Greg Mulholland MP, who visited the exhibition with the whole event finishing with an evening reception at Westminster Central Hall, where Lucinda received her award.

Lucinda said: "It was a very enjoyable day, getting to meet students from universities across the country, who are all passionate about what they study and have an active interest in research. The exhibitions were very inspirational and getting to watch a bit of debating in the House of Commons was great, but the highlight has got to be meeting Sir Anthony Cleaver!"

Emma also enjoyed getting to meet the other students. She said: "The event was an incredible opportunity, not just to talk about and take pride in my own research, but to see the hard work of undergraduate researchers from all across the UK. I was fortunate enough to meet many other inspiring students, create opportunities for future collaboration and learn about the work in other disciplines."

Thanks to the Footsteps Fund Award, the University will be sending more students to this year's conference, with 18 students from different Schools attending the University of Winchester on April 20-21.

If you would like to know more about Posters in Parliament or BCUR please contact Dr Andrea Jackson, member of the BCUR steering group.