Students and stakeholders gathered in the Union foyer to witness the grand unveiling of its £17 million ‘Union Upgrade’. 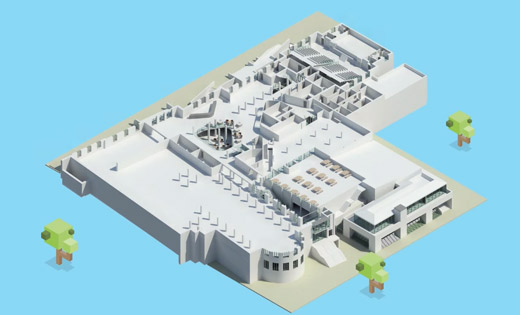 One of the most anticipated changes will be the Arts Quarter at the back of the Building, where there will be a full refurbishment of the underground Raven theatre, the creation of a multifunctional studio space for dance and performances and a brand new bar/foyer area.

The South entrance, next to the Hidden Café, will improve access to the common room, the Refectory and shops with disabled access to all floors of the Union.

Equality and Diversity Officer Gemma Turner said: “The big build will ensure that the Union is more accessible, not just for disabled students who require ramps or lifts, but more space and access will be issued to busier parts of the Union to ensure all students feel relaxed and safe.”

The Riley Smith Hall will also be refurbished to enhance performances and events, as well as cater to other students and societies.

Performance Rep Ellie Pead stood in for Activities Officer Fi Metcalfe. She said: “We want as many students as possible to be involved with the upgrade. For example, in the Riley Smith, we have a range of societies advising us on lighting choices and stage designs to make the change a true reflection on what students want.”

During the AGM, members of the Stage Musical Society raised fears over rehearsal space during the refurbishment.

Ellie Pead, reassuring SMS members, said: “Whilst building work is going on, activities will be rehomed or catered for elsewhere. The Union is in talks with the University and venues around Leeds to minimise disruption to societies who need their own space.”

The official refurbishment plans are a result of an accumulation of fundamental maintenance work, feedback from the 2012 ‘Slate Your Building’ and the 2013 ‘Express Yourself’ surveys and submissions from the 'Biggest Student Forum. Ever.'. KPMG have been selected as the auditors for the project.

Other changes include a brand new retail area on the lower level, with more space for exhibitions and lounge seating, a large glass roof in the foyer to improve the visual links between floors, a refurbishment of the toilets and expansion to the Old Bar.

Building work is set to begin in Winter 2015.

A video detailing all the changes to the Union Building can be found here.