Staff are being invited to take part in a public consultation about a new Leeds school aimed at 14 to 18 year olds interested in careers in engineering and advanced manufacturing. 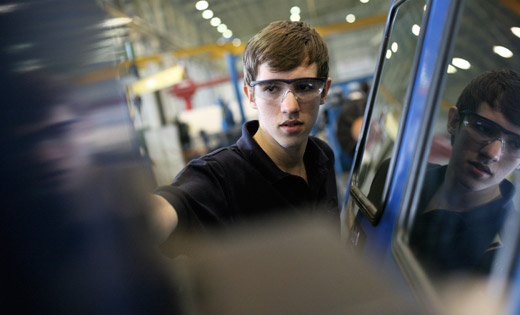 The University Technical College Leeds (UTC Leeds) is due to open its doors in September 2016 and is backed by the University, Leeds City Council and local organisations, including the major employers Siemens, Kodak, Unilever and Agfa.

An official six-week consultation period for the scheme began this week, following an announcement in August 2014 of government backing for the idea. University staff from Leeds and the wider community are encouraged to join in and comment on the proposed partnership.

The consultation will include a 'drop in' event at the School of Mechanical Engineering on Thursday 5 February. Key participants will be on hand from 2pm and 8pm to talk to members of the public.

Information is available through the UTC Leeds website and hard copy consultation packs are also being distributed at public buildings in Leeds city centre.

Local people are invited to complete a 5-minute questionnaire after attending the ‘informal drop in’ event or reading the consultation materials. They can also follow the consultation on Twitter @UTCLeeds.

Ken Cornforth, Education Lead for UTC Leeds, said: “We really want to get parents, students, businesses, and members of the local community involved in this ambitious project. It is about giving local young people a pathway into exciting and fulfilling careers in engineering and advanced manufacturing and we want to try to answer any questions people have.”

The UTC will be the first of its kind in Leeds. Its courses will integrate academic and practical components, with input from local employers and the University. Alongside the University, leading partners include Kodak, Siemens, Agfa Graphics, Unilever, Clarion Solicitors, The manufacturers’ organisation EEF, Women in Science and Engineering (WISE), Leeds City Council, Leeds City College and Leeds Chamber of Commerce.

The UTC is expected to have an eventual total capacity of 600 14-18 year old pupils and will operate under the government’s academy schools programme, offering traditional GCSEs and A levels with an additional focus on advanced manufacturing and engineering.

Phil Ball, Managing Director UK at Kodak, said: “There are insufficient engineering and technically skilled people available to businesses to meet current and future demands. The UTC Leeds specialising in Engineering and Advanced Manufacturing will address this challenge by developing the next generation of engineers and manufacturers”.