A book co-authored by Leeds Professor Graeme Gooday has been named as the best scholarly book on the history of science in 2014. 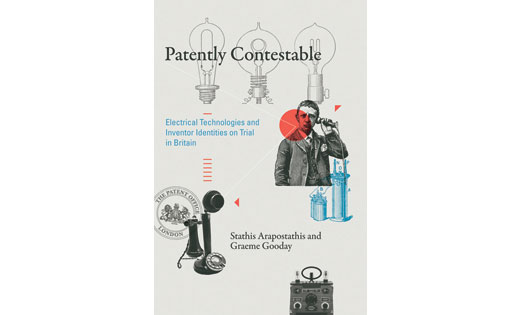 Patently Contestable, written by Professor Gooday from the School of Philosophy, Religion and History of Science, together with Stathis Arapostathis from the National and Kapodistrian University of Athens, has been awarded the 2014 Pickstone Prize by the British Society for the History of Science.

The book examines how Britain’s patent laws and associated cultures changed from the 1870s to the 1920s, and considers how patent disputes led to the development of the idea of the lone, heroic inventor.

Chairman of the judging panel, Hasok Chang , Hans Rausing Professor of History and Philosophy of Science at the University of Cambridge, said: “We were all very strongly impressed by the innovative and insightful scholarship contained in the book .  Aside from being a novel and informative account of an important piece of our technoscientific past, the book has clear pertinence to current issues surrounding intellectual property. It may also have appeal for wider audiences in providing insights that are pertinent to the uptake of future technologies. Many issues of economics, law and public policy discussed in this history remain as important for modern corporate practice as they were over a century ago.”

Professor Colin Divall from the University of York, who has reviewed the book, said: “Patently Contestable is a dazzling display of the power of history to speak to the most pressing concerns of our modern technological age.“