A team of our postdocs has won the national ChemistryYES competition sponsored by the Royal Society of Chemistry (RSC). 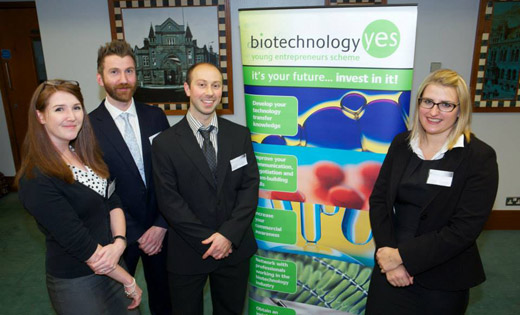 The competition was one of several elements of the Biotechnology Young Entrepreneurs Scheme, developed to raise awareness of the commercialisation of bioscience ideas among early career researchers.

Danielle Miles (Chemistry), Hazel Fermor (Biology), Anthony Herbert and Sami Tarsuslugil (both Mechanical Engineering) are all members of the Institute of Medical and Biological Engineering (iMBE). They were asked to create an imaginary company based on realistic yet hypothetical science, then learn how to put a business plan together before pitching to a panel of judges.

Together, the management team devised Geltide Biosolutions, a spin out company from the University of Leeds that has developed a patented slow release drug delivery system based on protein like molecules with a current application focus in the treatment of chronic back pain caused by a bacterial infection.

Danielle Miles, who played the role of Managing Director for Geltide Solutions, said: “We worked solidly for three days, only getting two or three hours sleep a night but the hard work certainly paid off.

“The head judge said there were two types of pitch: very good and awesome, and we were awesome!”

Winning the ChemistryYes competition means the team now compete in the national BiotechnologyYES final in London in December for the chance to win £2,500; an invitation to the BIA Gala Dinner; and an opportunity to attend the 2015 Rice Business Plan Competition in Houston, Texas.