A service of remembrance has been held to rededicate a war memorial 100 years after the start of the First World War. 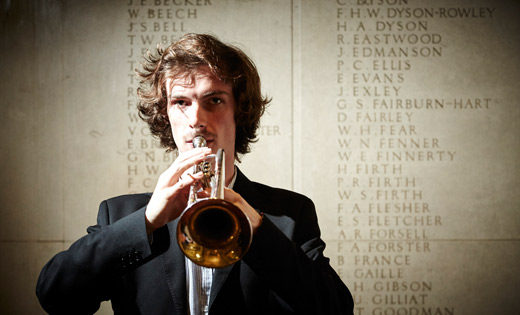 Following a welcome by Vice-Chancellor Sir Alan Langlands, Sir Andrew read his poem The Death of Harry Patch as part of a service conducted by the University’s Anglican chaplain, the Reverend Matt Ward.

Students read details of some of the fallen, before all 25 names were read out. School of Music fourth year student Will Blackstone then played The Last Post to herald two minutes of silence.

Guests then viewed a new exhibition, University of Leeds: Legacies of the First World War. It tells the stories of some of those commemorated by the memorial, as well as setting out various aspects of life at the University during the conflict. Developments in agriculture, chemistry, textiles, medicine and cultural life are examined, as well as the role of women and the Officer Training Corps (OTC) through the war years.

One of the names added to the war memorial is William Skirrow, who was born in Addingham, near Ilkley, in 1894. An electrician and cadet in the University OTC, he enlisted in Leeds and died in April 1918 aged just 24.

A distant cousin, Fraser Skirrow, said he was pleased his relative was being commemorated.

An amateur military historian who lectures regularly on Great War tactics, Mr Skirrow spent hours in the University library researching a book about the war. But he said he was unaware of William Skirrow’s link to the University, until he saw a story about the war memorial rededication on the internet.

The former Territorial Army captain, who leads annual battlefield tours for schoolchildren which take in the Flanders cemetery where his forebear was laid to rest, said: “I was very pleased to hear his name had been added to the memorial.”

Sir Alan Langlands said: “The discovery of several missing names has revealed a number of poignant and touching stories that we wish to mark and remember. Rededicating the roll of honour is a fitting way of commemorating these men, the Centenary of the First World War and all those who lost their lives.”

Sir Andrew Motion later took part in a concert in the Clothworkers Centenary Concert Hall on campus. Anthem for Doomed Youth saw him join pianist Ian Buckle for a performance of music and poetry.

Earlier in the day he led a poetry workshop for local A-level students at Leeds Central Library.

Councillor Lucinda Yeadon, Leeds City Council’s executive member for digital and creative technologies, culture and skills, said: “It was a massive honour to welcome Sir Andrew Motion. I really hope having the chance to speak with him about his work will have inspired those young people to follow in his footsteps and make the most of their literary talents.”

RT @UniversityLeeds: Science Minister @GeorgeFreemanMP visited @NexusUniLeeds this week to learn about its success in helping the Leeds Cit…

🏆 “The award highlights how we work together as the Faculty of Environment. We are so proud of us all!” 🎉 This yea… t.co/0yxutMHhCZ