Design graduate Ben Eggleton has been announced as the winner of the 2014 Friends of the University’s Art and Music Graduate Art Prize. 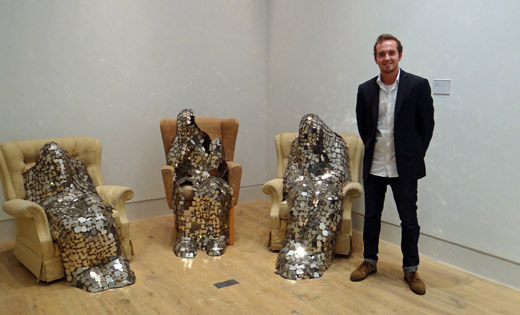 The FUAM Prize is awarded to an artwork with a high level of skill and a well received message.

Through plenty of debate and discussion over the four finalists, the judges chose Ben’s ‘Immurement’ as the winning artwork.

Ben’s work won over the judges, as well as the popular vote, which was judged online and by visitors to the gallery.

‘Immurement’ shows three sculptures sat in armchairs as a comment on the steady increase of dementia.

“Each metallic square and rectangle symbolises a specific memory that has become disjointed within the mind; becoming confused as they are overlapped and fused together by the individual welds.”

The prize giving ceremony took place at the Stanley and Audrey Burton Gallery on Tuesday 30 September. Ben received £250 prize money and an annual subscription to Aesthetica Magazine, which was presented by FUAM Chairman, David Salinger.

The three runners up, Lily Ackroyd-Willougby, Julia Moscardo I Chafer and Chloe Burdett, also received a prize of £100.

Akeelah Bertram will be returning to the University on Friday 3 October for an exclusive Light Night exhibition.