An A-list movie star, an award-winning musician and a polar explorer are among the recipients of University of Leeds honorary degrees this year. 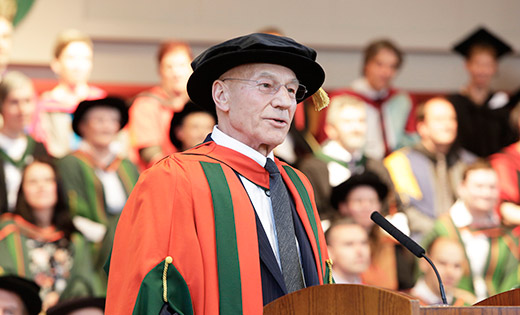 Joining them was Lord John Dyson, Master of the Rolls and Head of Civil Justice, and Professor Michael Arthur, previously Vice-Chancellor of the University of Leeds and now President and Provost of University College London.

Every year, the University of Leeds confers honorary degrees on people who have made a significant contribution to society. All of the recipients are distinguished by their outstanding achievements in their fields, which this year includes law, medicine, environmental studies, composing and acting.

Sir Patrick Stewart has had an illustrious career as an actor on both stage and screen. He is best known for his portrayals of Captain Jean-Luc Picard in Star Trek: The Next Generation, as Professor Charles Xavier in the X-Men film series, and for stage roles with the Royal Shakespeare Company.

Raised in Mirfield, he has strong connections with the local area and is the Chancellor of the University of Huddersfield. He is a tireless campaigner for the charities Amnesty International Refuge and Combat Stress, and has founded a scholarship at the University of Huddersfield to support postgraduate study of domestic violence. He will be awarded an Honorary Doctorate of Letters.

Sir Andras Schiff is regarded as one of the greatest piano players of our time, winning numerous awards and honours such as the Golden Mozart Medal (of which there have only been four other winners in 70 years), the Royal Philharmonic Society’s Gold Medal and a Grammy for best Instrumental Soloist. Schiff was also a finalist in the 1975 Leeds International Piano Competition. He was created a Knight Bachelor in the Queen’s Birthday Honours this year in recognition of his contribution to classical music. He will be awarded an Honorary Doctorate of Music by the University.

Until recently Professor Jane Francis was the Dean of the Faculty of Environment at the University of Leeds, and is now the director of the British Antarctic Survey. She has participated in numerous polar research expeditions and, in 2002, became the fourth woman to receive a Polar Medal. Her most recent research has focused on understanding climate change in the polar regions. She will be awarded an Honorary Doctorate of Science.

Lord John Dyson is Master of the Rolls, the second most senior judicial post in England and Wales. Born and raised in Leeds, and a graduate of Leeds Grammar School, Lord Dyson maintains strong links with the region. He will be awarded an Honorary Doctorate of Laws.

Professor Michael Arthur was Vice-Chancellor of The University of Leeds from 2004 to 2013. He is also a Commissioner for the US-UK Fulbright Commission and a council member of the Medical Research Council. Professor Arthur will also be awarded an Honorary Doctorate of Laws.