Le Tour at the University

A group of community riders from the University were some of the first to ride past the thousands of people who gathered in Leeds for the Riders' Parade last week. 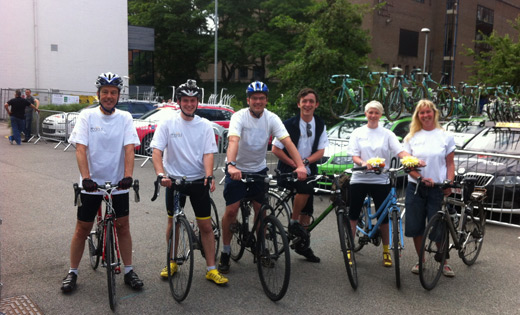 The parade started from The Edge sports centre and wound its way through Millennium Square before ending up in the First Direct arena for the Rider’s presentation.

The community cyclists were:

Ed McAlone – Ed has led the University’s Tour de France-inspired programme of activities over the last year to encourage staff and students to take up cycling for both sport and recreation.

David Wardle – The University’s Deputy Secretary, David has been incredibly supportive of the University’s cycling programme, ensuring its success and legacy is long-lasting.

Lizzie Reather – Chair of the University’s Bicycle Users Group and Leeds Cycling Campaign, Lizzie has carried out outstanding work to promote cycling and improvements in cycling infrastructure on the University campus and in the wider area.

Tina Kelly – has volunteered countless hours of her time helping adult beginner cyclists gain enough confidence to be able to commute to work at the University.

Connor Walsh - runs the University's Bike Hub - where he used to volunteer as a student - a place where anyone can hire a bike and learn how to repair their bikes. He also volunteers with the Star Project, giving asylum seekers access to sustainable and affordable transport in the form of a bicycle.

“It was an amazing experience and great for some of the University’s unsung heroes of the cycling community to be recognised for the excellent work that they do on a regular basis.” says Ed, “I never imagined there would be such a large crowd and I’m sure I speak for all the riders in saying it was an experience we will never forget.”

Graham continues: “As far as the ride and being involved in a small way in the opening ceremony, it was such a privilege to represent the University of Leeds in Yorkshire's showcase event - the greatest Grand Depart ever. Unforgettable!”

For photographs of all the Tour de France teams leaving The Edge, please see their Facebook page.