Get a taste of history with the Leeds International Medieval Congress

Two thousand of the world’s most knowledgeable medievalists, including historian and TV broadcaster Michael Wood, are set to descend on the University for this year’s International Medieval Congress. 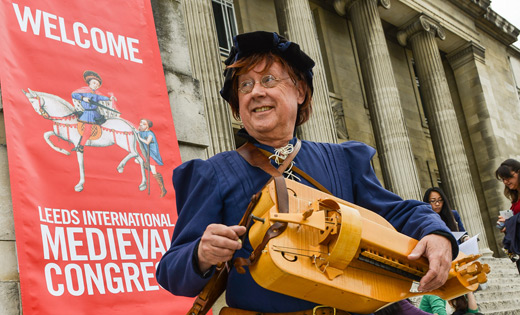 Monday 7 July – Thursday 10 July marks the 21st annual International Medieval Congress, where the people of Leeds are invited join in with a series of events open to the public.
A free guest lecture by Michael Wood and a range of different medieval activities on and off the University campus will be available, including historical crafts such as mail armour production, spinning, textile production, dyeing and even an apothecary.
The local community is also invited to enjoy samples of medieval food, falconry displays, medieval musicians and story-tellers.
Whether it’s the hype surrounding Game of Thrones, the debate concerning the location of important medieval battlegrounds across the country or the regional in-fighting to secure the remains of King Richard III, this year interest in the medieval world is at an all-time high and the Congress offers an opportunity to sample that world.
Focusing on the theme of Empire this year, the Congress will offer delegates 500 academic sessions, as well as a wide range of concerts, performances, readings, round tables, excursions, book fairs and associated events.
In the past 20 years, The International Medieval Congress at University of Leeds has presented over 21,000 papers to over 12,000 visitors, bringing more than £10 million into the city and surrounding areas. This year the programme has more than 1700 participants from more than 50 countries.
An extravagant medieval feast is also a focal feature of the Congress, bringing together cuisine from a ‘forgotten empire’ to honour a variety of medieval recipes, such as traditionally roasted meats, chick peas and unusual cheese-stuffed eggs, not to forget Yorkshire’s finest bitter, specially brewed for the Congress. Over 18,000 gallons have been quaffed so far since 1999, and despite careful planning, delegates still manage to stretch the supply to the limits each year.
Director of the International Medieval Congress at University of Leeds, Axel Müller said: “The public are encouraged to come along and get involved in this medieval extravaganza. There are numerous events for people to join in and experience medieval culture, craft and cuisine.”
Posted in: University news
Email Tweet Like LinkedIn