A promising young researcher from Leeds has become the first student from a non-North American institution to win a prestigious academic prize. 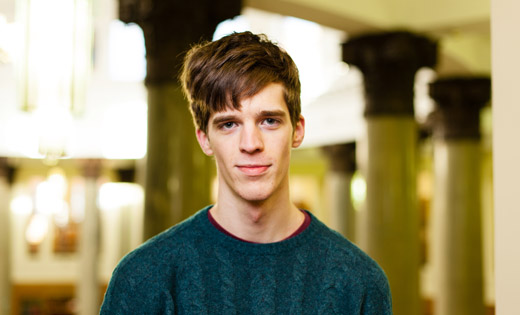 James Fraser, from the School of Philosophy, Religion and History of Science, has landed the Clifton Memorial Prize at a philosophy of science conference hosted by Western University in Ontario, Canada.

Steven French, Professor of Philosophy of Science at the University of Leeds, said: “The Clifton Memorial Prize is one of the most prestigious awards in the philosophy of physics and is awarded each year to the top graduate student paper presented at this important conference dedicated to the philosophy of logic, maths and physics.

“Previous winners include some of the very best young researchers in the field, but this is the first time it has been awarded to someone outside of Canada or the USA.”

Professor French said James’ achievement was all the more remarkable considering that he was only in the second year of his PhD.

“The award represents a significant achievement for someone at this early stage of their career and clearly bodes well for James' future,” he added.

Just back from Canada, James said: “I was surprised and honoured to receive the prize. Many previous prize winners have gone on to do work in the philosophy of physics which I really admire.”

Describing the subject of his paper, Spontaneous Symmetry Breaking in Finite Systems, he said: “There is an enduring intuition that mental phenomena like consciousness are emergent, in the sense that they cannot be explained by physical science alone.

“Recently, some physicists and philosophers have claimed that this kind of autonomy also occurs within physics itself. In my paper I put forward an approach to understanding how superconductivity and other so called "cooperative phenomena", which some have claimed are strongly emergent, can after all be explained in terms of the properties of the fundamental particles which make up matter.”