Three Leeds initiatives have been recognised in the 2014 Engage competition for their innovative and effective methods of engaging with the public. 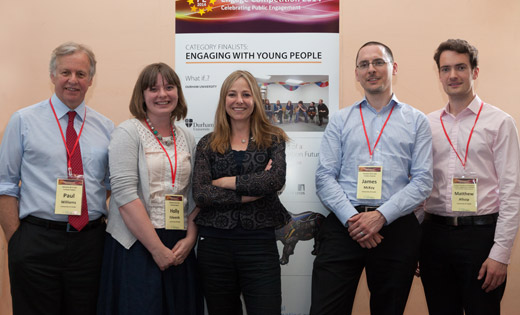 The Engage competition, organised by the National Co-ordinating Centre for Public Engagement, attracted over 230 entries this year, and competition was fierce.

The graphic novel Dreams of a Low Carbon Future, made it to the top three in the category ‘Engaging with young people’.  A team of PhD researchers and professional artists, led by Professor Paul Williams and James Mackay from the Doctoral Training Centre in Low Carbon Technologies, worked with over 370 schoolchildren from Yorkshire to create the book, which explores children’s visions of a sustainable future.  Copies of the book have been circulated to schools and museums throughout the UK.

A project led by the School of Medicine’s Matthew Allsop, involving volunteers at St Gemma’s Hospice charity shops, also made it to the top three in the ‘Individual-led project’ category.  Volunteers from the high street shops surveyed customers on their views about palliative and end-of-life care, gathering vital insights into public priorities for research.

LeedsACTS!, a collaboration between the city’s three universities and over 70 charity-sector organisations in Leeds, was placed in the top six in the ‘Collaboration’ category.  The partnership, initially led by the University’s Health and Professional Services Innovation Hubs, aims to make academic expertise more easily available to third sector organisations in the city.

Vice-Chancellor Sir Alan Langlands said: “These are excellent examples of some of the outstanding public engagement activities that take place across campus, which inspire and involve the public in the work of the University.  It’s really heartening to see these projects recognised and fantastic that three projects from Leeds made the shortlist against such strong competition.”

Banner picture shows 'Phaedra and the floating city', from Dreams of a Low Carbon Future