Celebrating the work of a neglected scientific pioneer

A Leeds academic has shed important new light on the fascinating story of a pioneer whose contribution to one of science’s biggest discoveries has long been overlooked. 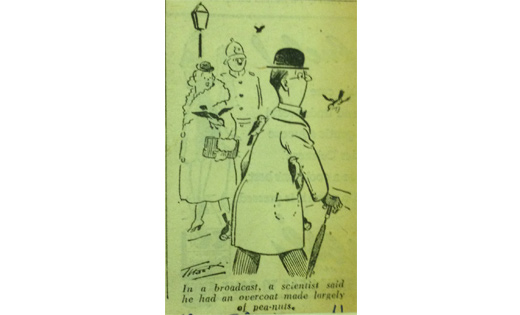 As a result, Professor Astbury helped transform our understanding of biology and made the very first studies of the structure of DNA, so helping to lay the foundations for the 1953 discovery of its double-helical structure by the Cambridge scientists James Watson and Francis Crick.  Yet while they went on to win the Nobel Prize, Professor Astbury's name is barely remembered outside Leeds.

Setting Professor Astbury and his work against the wider social and historical backdrop of the time, The Man in the Monkeynut Coat, by Visiting Fellow Kersten Hall, explores the life of this long neglected pioneer.

The book also argues that Professor Astbury’s true scientific legacy extends far beyond DNA.  Using the method of X-ray diffraction which had been developed at Leeds a few years earlier by his mentor, Sir William Bragg, Cavendish Professor of Physics at Leeds from 1908-1915, Professor Astbury blazed the trail in using this technique to explore the physical structure of the giant molecules that make up living things.

In doing so, he came to be one of the most prominent evangelists for the new science of molecular biology, which sought to understand life in terms of molecular shapes.

Dr Hall, a molecular biologist and science historian, said: "The discovery of the structure of DNA was without doubt one of the biggest landmarks in the history of science.  It transformed our understanding of biology and enabled huge advances in medicine such as the production of new forms of insulin for the treatment of Type 1 diabetes.  Yet few people realise that the very first attempts to solve the structure of DNA were made right here in Leeds."

Today, molecular biology is at the heart of modern medicine and has given invaluable insights into diseases such as sickle-cell anaemia.  It has also given rise to the modern biotechnology industry - a legacy which the book argues can be traced to Professor Astbury and his insight that the shapes of biological molecules might be deliberately altered.

This idea found powerful expression in his rather unusual overcoat, which was woven from monkeynut proteins that had been deliberately manipulated at the molecular level to make them into a textile fibre substitute called Ardil. It was hoped it might prove a cheap alternative to wool; Professor Astbury wore the coat as an example of the power of the new science.

Today, the Astbury Centre for Structural Molecular Biology stands as a fitting tribute to Professor Astbury and his work.  The Centre was founded in 1999 as an interdisciplinary research centre and is today one of the University’s powerhouses of research, aiming to understand life in molecular detail.

The Man in the Monkeynut Coat: William Astbury and the Forgotten Road to the Double-Helix, was published on 12 June by Oxford University Press.