The official Grand Depart countdown clock, crafted by students from across the Faculty of Engineering, has been unveiled in Leeds. 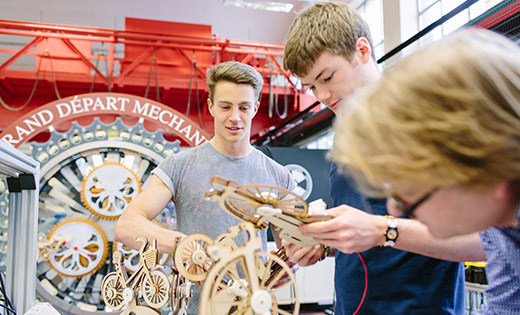 The timepiece, entitled the ‘Grand Depart Mechanical Theatre’, was unveiled to waiting crowds at the Trinity Leeds shopping centre on Friday 16 May.

Made from giant steel cogs and precision cut woodwork, the clock features cyclists, bikes and a massive outer cog which counts down days while smaller inner dials tick off the remaining hours, minutes and seconds.

Such is the intricacy of the clock, the cogs and cyclists appear interconnected, bringing together a range of bicycles and cyclists which cycle at positions around the outer rim.

The twelve unique mechanical cyclists were developed from Barney’s 2D drawings using 3D computer aided design to produce data which was then used to manufacture hundreds of parts using the faculty’s 3D printing and laser cutting facilities.  The custom-made printed circuit boards were designed and built by the students with computer code written specifically for this application to control the cyclists and the light display.

Dan Trowsdale said: “Working on this historic clock has been a tremendous experience for me and the students.  The unveiling on Friday marked the culmination of many weeks of hard work and we are delighted with the result. We hope it is a source of pride to the people of Leeds as we build up to the Grand Depart.”

The clock was unveiled on 16 May to mark 50 days until the start of the Tour de France.