Sheena Radford, Astbury Professor of Biophysics at Leeds, has been made a fellow of the Royal Society. 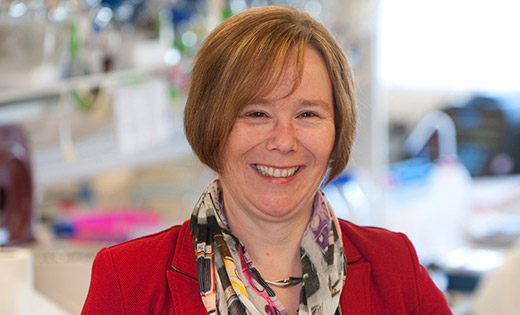 The honour is the highest accolade in British science and recognises Professor Radford’s “seminal contributions to understanding how proteins fold and function biologically.”

Professor Radford’s work has unlocked the molecular details of the misfolding of proteins implicated in amyloid diseases, offering a key to understanding and combating these conditions.

The fellows of the Royal Society are elected for life by their peers on the basis of excellence in scientific research and include the most eminent scientists, engineers and technologists from the UK and Commonwealth. Past fellows are a roll call of the most famous names in British science down the centuries, including Isaac Newton, Robert Boyle, Charles Darwin and Stephen Hawking.

Professor Radford said: “This is an accolade given by your peers for your contribution to science and that is really why it is such an honour. This recognises 30 years of hard work not just by me but by my whole team and all the people I have worked with over the years, both in my early years as a scientist and since joining Leeds as a lecturer in 1995.”

She added: “By becoming an FRS one becomes one of the elders of the scientific community. I am not sure what I feel about being described as an ‘elder’, but the fellows have a major role in leading science and I am proud to be one of them.”

Vice-Chancellor Sir Alan Langlands said: “The whole University congratulates Professor Sheena Radford on being elected as a Fellow of the Royal Society.  It is right that her world leading work in the mechanisms of protein folding and misfolding have been recognised in this way and we take great pride in her scientific acumen and achievements.

“Sheena’s unfailing loyalty and commitment to the University of Leeds is inspirational and her leadership of the Astbury Centre exemplary.  By bringing together researchers from across the University – from physics, the biological sciences and chemistry – she is enabling interdisciplinary science of the very highest quality, and helping us all understand the molecular basis of life.  News that Sheena is an FRS will be universally welcomed by her many friends and colleagues here and around the world.”

Professor Michael McPherson, Interim Dean & Pro-Dean for Student Education in the University’s Faculty of Biological Sciences, said: “Professor Radford is a role model as a scientist and academic leader. She has contributed extensively to the development of the School of Molecular and Cellular Biology, the Astbury Centre, the Faculty and the University, and has a reputation for mentoring and developing talented new scientists. We are all delighted at this well-deserved recognition of her scientific excellence.”

Fifty new fellows were announced by the Royal Society this year, with 10 new foreign members. Seven of this year’s intake are women.

Sir Paul Nurse, President of the Royal Society, said: “Science helps us to better understand ourselves and the natural world on which we depend. Building scientific knowledge helps us face some of the planet’s biggest challenges such as food shortages, climate change and tackling disease. These scientists who have been elected to the Fellowship of the Royal Society have already contributed much to the scientific endeavour, whether that is in academia, industry or government.”