Works by Martin Froy, the University's first Gregory Fellow in Painting from 1951 to 1954, will be on display in the Stanley & Audrey Burton Gallery from 7 May 2014. 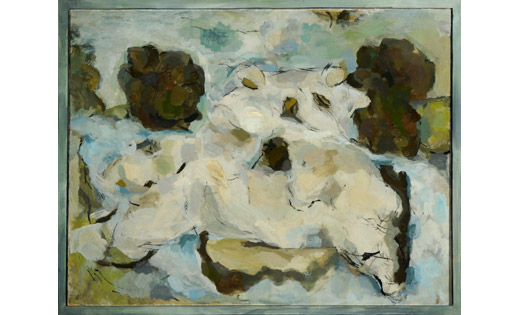 In the 1950s, the University of Leeds introduced its innovative Gregory Fellowships in poetry, fine art and music — the first artist-in-residence programme of its kind at a UK university.  Artist Martin Froy was its first Gregory Fellow in Painting between 1951 and 1954, selected by an advisory committee which included T.S. Eliot, Hebert Read, Henry Moore and Professor Bonamy Dobrée.

Sixty years after Froy completed his Fellowship in Leeds, the University has invited him back to exhibit his artwork of the 1950s which so captivated the first Gregory Fellowship Advisory Committee, and also to explore how the Leeds residency affected his later practice.  Placing Froy within the rich milieu of British figurative artists of the late 1950s and 60s, this exhibition will celebrate the contribution Froy made to British post-war figurative painting, in a tradition led by contemporaries such as Francis Bacon, Frank Auerbach and Lucian Freud.

There will be an opening reception on Tuesday 6 May from 6-8pm, to which all are welcome.