The UK Natural Environment Research Council (NERC) has awarded the University of Leeds £5 million to host and lead two national centres for studying the Earth from space. 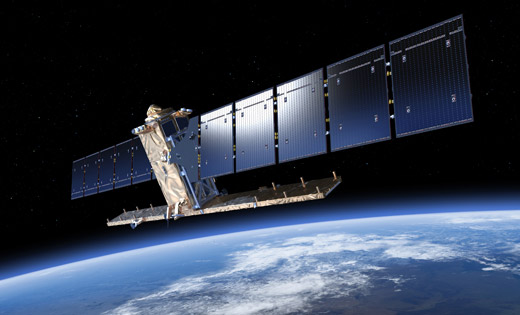 Professor Tim Wright from the School of Earth and Environment at the University of Leeds and Director of COMET, said: “Today's changes mark a new chapter in the history of CPOM and COMET. It presents a golden opportunity for the scientific community to better exploit the growing volume of data collected by satellite sensors, placing the University of Leeds at the heart of the government's strategy to drive economic growth through investment in space technologies."

Scientists in CPOM are gearing up to analyse the first images to be acquired by the European Space Agency's Earth observation satellite Sentinel-1A, which is due to be launched on 3 April 2014. The images, expected in the coming weeks, will give scientists the first glimpse of how the polar ice sheets have changed since the demise of EnviSat - Europe's last environmental satellite mission - in 2012.

Professor Andy Shepherd from the School of Earth and Environment at the University of Leeds and Director of CPOM, said: “This is an exciting time for Leeds to be taking the driving seat in Earth observation, with the upcoming launch of the Sentinel-1A satellite. We will soon have unprecedented views of our planet from space that will allow us to detect millimetre-scale movements of the Earth's crust and ice fields as they change over time.

“Glaciers in Antarctica and Greenland are flowing faster today than at any time in the satellite era, and the measurements we have acquired from space since the 1990s have transformed our ability to study the impacts of climate change. We’re confident that Sentinel-1A will provide a step change in our ability to detect these changes, as it is the first mission designed with collecting observations of ice motion in mind."

Meanwhile, analysis of images by COMET, which will look at the motion of the Earth’s crust, will take several months before the first results can be announced, as the tectonic plates move much more slowly, from a few to tens of millimetres per year.

Over the next 5 years, COMET scientists aim to measure tectonic strain with unprecedented resolution for the entire planet, measure deformation and gas release at every active volcano, and combine these data with ground-based observations to build new models of these hazardous processes.