The design for the Tour de France Grand Depart countdown clock, to be made by mechanical engineering students at Leeds, has now been revealed. 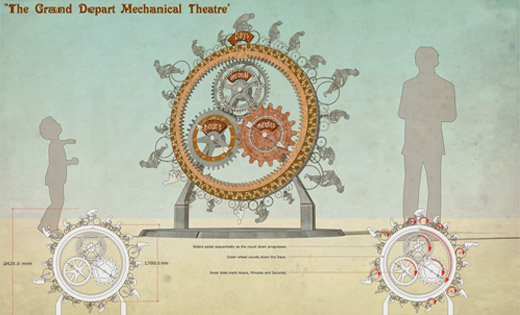 The design by theatre designer Barney George, entitled ‘The Grand Départ Mechanical Theatre’, is to be turned into reality by students from the School of Mechanical Engineering before going on public display in the Trinity Leeds shopping complex.

The chosen design is a celebration of cycling directly inspired by the mechanics of a bicycle itself, featuring a giant steel cog with a range of moving miniature cyclists of all kinds, from penny farthings to modern race bikes, on the outside.

With the outer cog counting down the days, at the same time the three inner dials will be counting down hours, minutes and seconds.  As the days progress, more of the miniature riders will be activated.  As the countdown reaches zero, the finale will feature a series of chimes and confetti cannons to signal that the time of the Grand Départ has arrived.

Dan Trowsdale from the School of Mechanical Engineering, who will guide the students involved in the project, said: "The clock is a fantastic piece of design which will pose some technical challenges for the students at the university. Mechanical engineers and product designers from the Faculty of Engineering will be tasked with designing, programming and building a light-based countdown which will run through to race day.

“Using our 3D Computer Aided Design and 3D printing facilities we will also be designing and building a number of mechanical cycling ‘automata’ which will cycle at various times through the day. It is going to look amazing!"