Making their own good Luck 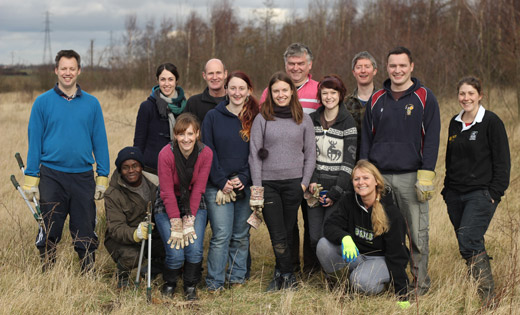 Ledston Luck, between Micklefield and Kippax to the east of Leeds, was the last working coal mine in the Leeds area until its closure in 1986.  The site became a nature reserve in the early 1990s and is now managed by the Yorkshire Wildlife Trust.  It is home to over 4,000 bee, common spotted, and southern marsh orchids; its ponds attract emperor dragonflies, large red and emerald damselflies; and birds such as the yellowhammer and grasshopper warbler breed on the site.

The University's volunteers, from Residential Services, Accommodation Office, Leeds University Union, and Sustainability, helped to clear away scrub and small trees which had encroached on the reserve's hay meadows.  Using the cuttings that they had cleared, they formed a 'dead hedge' of intertwined wood to provide a refuge for local animals and birds.

A good day was had by all the volunteers, who were particularly grateful for the lack of rain on the day!

If you would be interested in volunteering for similar events in future, contact Lizzie Dealey at the Yorkshire Wildlife Trust.