Legacies of the First World War

Exploring the impact of innovation in technology during the Great War, and shedding light on how people resisted the war are just two of many insights offered by new University of Leeds research.

Photo from the Liddle Collection: From the papers of L.M.Henry, a Doctor serving at a women's hospital in France 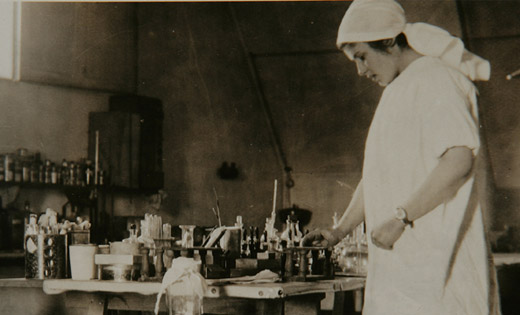 Legacies of War was established four years ago as a research and public engagement venture in anticipation of the 1914-18 war’s centenary.

Alison Fell, Professor of French Cultural History, is leading the project. She said: “The centenary is a valuable opportunity to explore the many ways in which people’s everyday lives, both in Britain and further afield, were touched by the war.

“But rather than simplifying our knowledge of it, the anniversary is our chance to complicate the war, by trying to understand the legacies in all their variations and complexities. This offers a more worthy way of paying tribute to the men, women and children who lived through it, or who died because of it.”

The ambitious programme, which involves researchers across the University from a broad range of subject areas with expertise in France, Germany, Belgium as well as Britain, has five themes:

The wide range of topics examined under these umbrella themes include refugees and prisoners of war; stretcher bearers, war hospitals and developments in medicine; the development of telecommunications; women workers; conscientious objectors, peace and resistance movements; colonial and Jewish experiences; film and photography and the role the University of Leeds played during the war.

At the heart of much of the research is the University’s Liddle Collection, an unrivalled archive that includes the personal papers of more than 4,000 people, as well as artefacts, memorabilia and oral testimonies of veterans and their relatives.

Among the many exhibitions, conferences and public events planned as part of Legacies of War will be a poignant rededication at the roll of honour in the Brotherton Library in October 2014. Some two dozen names of University staff and student victims of the war – unintentionally missed off when it was unveiled – will be added. Later that evening, a concert will feature readings by former poet laureate Andrew Motion, and music by pianist Ian Buckle.

Legacies of War has seen several key partnerships flourish, including collaborations with the Imperial War Museums, the BBC and Leeds City Council. Academics have also worked closely with local historians, community groups and arts organisations across the Yorkshire region. Other collaborations include a project with the University of Lille, Leeds’ twin town in France, and international networks of scholars working in the US and Europe.

Vice-Chancellor Sir Alan Langlands said: “Our Legacies of War project has looked at the profound effects those four years had on people’s lives and the fundamental changes they unleashed in almost every aspect of society.

“Academics from a varied range of disciplines have worked closely with partners, ensuring genuinely two-way flow of knowledge and experience between our staff, students and members of the public."

A Massive Open Online Course (MOOC) is also being prepared in collaboration with the BBC by Professor Fell and colleagues to run on the FutureLearn platform. This free course will focus on the diverse ways in which the war has been remembered in 20th century Britain, France and Germany.

Financial support for Legacies of War has come from the Arts and Humanities Research Council, the Heritage Lottery Fund, the Higher Education Innovation Fund and the Wellcome Trust. This has already helped fund two PhD studentships and three post-doctoral research posts. A further project, looking at heroism during and after the war, has involved the White Rose University Consortium Studentship Network, a partnership with the universities of Sheffield and York.

The University has also teamed up with the publishers of the Yorkshire Post and Yorkshire Evening Post to support the newspapers’ coverage marking the centenary with academic expertise and access to the Liddle Collection.

RT @LULGalleries: Plans this evening? How about attending the official launch of Sara Barker's 'The Worlds of If', a recent addition to ou…