A graduate of the School of Music has become our first winner at the Grammys, the annual US event which celebrates the best artists and recordings of the year. 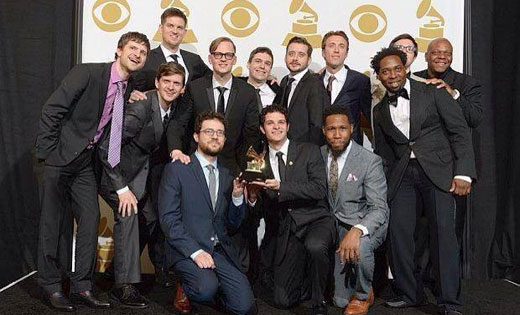 Bill Laurance is a keyboard player with jazz sensation Snarky Puppy, who won their prize for Best R&B Performance on the song 'Something' on which they were joined by soul singer Lalah Hathaway.

New York and Texas-based Snarky Puppy have become one the most talked about of groups in recent times, ten years after their original formation.  The band's dynamic blend of jazz, soul and funk styles has won them fans across a wide constituency and on both sides of the Atlantic.  Their ninth album is imminent.

A founding member of the group, Bill Laurance completed his performance studies at the University of Leeds just over a decade ago.  While in the department, he established connections with the University of North Texas, a famed jazz school that each year welcomes Leeds instrumental students taking an international study year as part of their BMus degree.  A number of members of Snarky Puppy have UNT associations and the collective operating under the band's name takes a close interest in music education issues.

Bill explained: “I met Mike from Snarky Puppy through a mutual friend, also from Leeds Music School, who went to the University of North Texas.  Mike came to the UK and we played some gigs together and the rest is history.  I was very lucky to meet someone so driven, talented and optimistic, but I guess it goes to show that you never know who you’re going to meet on any gig.  It’s always worth taking the gig, especially when you’re starting out.  I could never have dreamed that 10 years later we'd be winning a Grammy."

Outside his Snarky Puppy commitments, Bill has worked with many artists including Morcheeba and Miss Dynamite.  He has also forged numerous links with the dance world, collaborating extensively with companies including Alvin Ailey, Ballet Rambert and English National Ballet and Matthew Bourne, and the Leeds-based organisations Phoenix Dance and Northern Ballet Theatre.

School of Music Senior Teaching Fellow Dan Gordon, who taught Bill classical piano in his first year, said: “Bill was a live wire; a thoughtful musician with a nice instinct for jazz. I always knew he'd go far. Congratulations from all of us on his success!”

Bill's debut album/DVD, 'FLINT', is due for release on 18 March 2014 and features members of Snarky Puppy together with a classical orchestra.