Dr Martin Seeger, Associate Professor of Thai Studies, has received a rare honour from the King of Thailand. 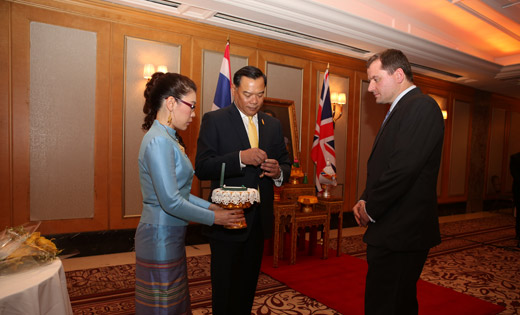 The Royal Thai Embassy in London celebrates the birthday of His Majesty King Bhumibol Adulyadej and the National Day of Thailand each December 5.

As part of these celebrations, a small number of selected individuals are chosen to receive a Royal Decoration, honouring their contribution to Thai society.

Dr Seeger, who was ordained as a Buddhist monk in the late 1990s, received the Royal Decoration of the Fifth Class of the Most Admirable Order of the Direkgunabhorn, in recognition of his work and efforts in promoting better understanding and appreciation of Thailand and its culture to the people in the UK.

He said: “It is a great honour to have received this Royal Decoration. To be recognised by His Majesty King Bhumibol Adulyadej for my work in the field of Thai Studies is really magnificent and very special. This prestigious award shows the importance of Thai Studies at the University of Leeds and the impact it has."

The award was presented by the Thai Ambassador to the UK, His Excellency Pasan Teparak, at the Lancaster London Hotel.

The prestigious honour comes as Thai Studies at Leeds– which Dr Seeger played a key role in establishing – prepares to celebrate its tenth anniversary next year. Three years ago, he received a received a ‘Friends of Thailand’ award from the Tourism Authority of Thailand for his outstanding academic contributions to creating awareness of Thailand.

Since the introduction of Thai Studies, East Asian Studies has been working closely with, and received considerable support from, the Royal Thai Embassy in London. The Embassy has repeatedly offered internships to our students and given annual awards for outstanding academic achievements, as well as offering three scholarships to British postgraduate students to undertake fieldwork research in Thailand.