Publications by two Professors from the School of History – 'The Color Revolution' by Professor Regina Blaszczyk, and 'Machiavelli' by Professor Robert Black - have been highly acclaimed. 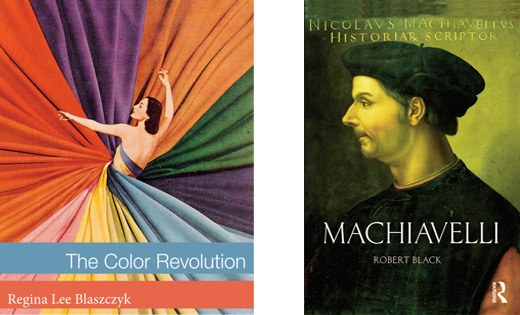 Prof Regina Blaszczyk has been awarded the Sally Hacker Prize by the American Society for the History of Technology for The Color Revolution.

The Sally Hacker Prize is awarded for the best popular book written in the history of technology during the previous three years.

The citation for the prize reads: “This extraordinary work, which effortlessly spans a century and a half, traces the historical origins of color's intriguing and omnipresent power in our modern lives. To do that, the book effortlessly dives into the history of chemical engineering, product design practices, shrewd marketing strategies, and consumer behaviour, bringing stories from each field together in a novel, fascinating piece of synthetic scholarship.

“Blaszczyk's beautifully, thoughtfully designed book is bound to become a standard academic reference - for historians of technology as well as for a range of other scholars - but that's only the beginning; her work is of great importance because of the exemplary way in which it reaches out to a broader audience.”

Professor Robert Black’s Machiavelli has been named a Book of the Year by the Times Literary Supplement, which said:

“Robert Black has produced easily the best of the many introductions to Machiavelli; his book is both immensely learned and deceptively easy to read. Everyone should read The Prince, and anyone who reads it should read Black’s Machiavelli.”

Professor Black takes part in a discussion of ‘The Medici Dynasty’ for BBC Radio 4’s In Our Time with Melvyn Bragg, to be broadcast at 9am on Boxing Day.