Colleague presents report to the House of Lords

Dr Sean McLoughlin, Senior Lecturer in the School of Philosophy, Religion and the History of Science, has launched his preliminary report, Organising Hajj-Going in Britain, at the House of Lords. 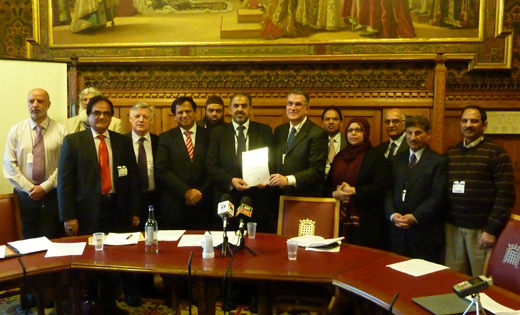 The report was written during the early stages of a 2013-14 British Academy Mid-Career Fellowship, and draws on data collected in collaboration with the British Museum, which was awarded an AHRC large grant to support its 2012 exhibition, Hajj: Journey to the Heart of Islam.

The Westminster launch took place during the annual post-Hajj event organised by the Association of British Hujjaj. The Association is concerned with the welfare, health and general interests of those 125,000 British Muslims who travel every year to Mecca in Saudi Arabia to complete the Hajj or another form of Islamic pilgrimage.

The meeting was hosted by the Association’s patron, Lord Nazir Ahmed of Rotherham, and was attended by other members of the Lords and Commons, as well as various UK Hajj industry stakeholders including pilgrims, tour operators, trading standards officers and police representatives.

Dr McLoughlin explained that British Muslims’ expectations of actually performing the Hajj have been transformed in recent decades.

“Since the 1960s, rates of Hajj-going have grown around twice as fast as the Muslim population in Britain,” he said. “Unlike pilgrims in the Muslim world, Muslims in the West have not usually been constrained by national Hajj quotas, generally have greater access to the financial resources necessary to travel, and no longer see Hajj as the preserve of older pilgrims preparing for the afterlife.”

But he added: “While the Ministry of Hajj in Saudi Arabia now requires pilgrims to make their visa and accommodation arrangements through around 80 approved British Muslim tour operators, only around 50-60% of pilgrims book directly through those who are ATOL approved.

Dr McLoughlin concluded his address by drawing attention to the way in which British Muslim organisations and local and central government could better respond to these issues. He also expressed the hope that his work would make a contribution to practitioners and policy-makers’ broader understanding of the changing social, economic, political and cultural dynamics at work in the organisation of Hajj-going in Britain.

His report is published by the University’s Community Religions Project (CRP) and can be found here.