Postgraduate writing student Zodwa Nyoni from the School of Performance and Cultural Industries has won a prestigious Channel 4 Playwrights’ Bursary for her one act play Boi-Boi is Dead. 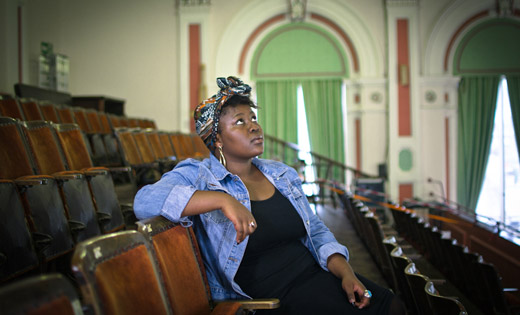 The award will give Zodwa the chance to spend a year in residency at West Yorkshire Playhouse, where she’ll continue to develop her writing through workshops, rehearsed readings and collaborating with directors.

Boi-Boi is Dead is a bitter-sweet family drama set in Zimbabwe, and deals with the fallout from the death of a successful jazz trumpeter. Initially drafted as part of workshops at the Playhouse, the play has been intensively rewritten over the last few months as part of Zodwa’s MA in Writing for Performance and Publication, under the supervision of programme director Garry Lyons.

Zodwa was one of five C4 bursary winners selected by a judging panel which included former Artistic Director of the National Theatre Sir Richard Eyre, Mamma Mia! writer Catherine Johnson and leading BBC radio drama producer John Tydeman. News of the award came through as Zodwa was completing an apprentice poet residency at the Ilkley Literature Festival, where she has been collaborating with a jazz musician on her performance poetry.