The iconic Parkinson Building turned pink on Wednesday night (23 October) to show support for the fight against breast cancer. 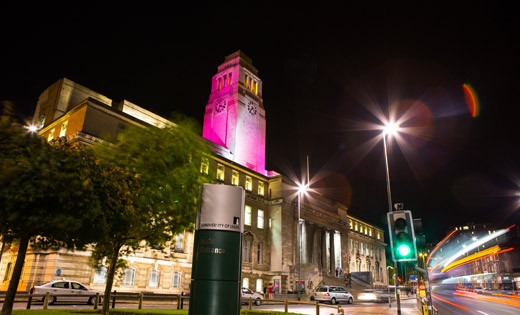 The Parkinson Building was one of 18 landmarks across the UK to turn pink as October’s Breast Cancer Awareness Month draws to a close. Cities participating in the Breast Cancer Campaign initiative include London, Glasgow, Cardiff, Belfast, Newcastle, Gateshead, Bristol, Coventry, Bath, Leeds, Windsor and Birmingham.

The Parkinson Building turned pink from about 6.30pm on Wednesday night until dawn on Thursday 24 October.

The University is one of four sites across the country that house Breast Cancer Campaign’s pioneering Tissue Bank. The first of its kind in the UK, the Bank is a unique national resource for researchers in the UK and Ireland to collect and store tissue samples, safely and consistently.

Professor Valerie Speirs, a member of the Leeds Institute of Cancer and Pathology at the University of Leeds, said: “I am proud to be part of a team at the University of Leeds who are working towards unlocking the cure for breast cancer and very grateful to everyone who supports Breast Cancer Campaign’s research. While tremendous strides have been made in breast cancer research over the years, it remains a very complex disease and there is still much to learn, so having a resource like the Tissue Bank is vital if we are to accelerate lab findings to the clinic.”

The Tissue Bank was made possible thanks to Asda’s Tickled Pink campaign, which has donated £3 million to help create and develop the resource.

Lisa Burnett, Asda’s Charity Partnership Manager, said: “This pioneering Tissue Bank in Leeds is only possible because of the continued support we receive for Asda's Tickled Pink campaign from customers and colleagues. We would like to thank everyone for their hard work and dedication over the past 17 years. We hope this will play a significant role in helping the thousands of people who are diagnosed with breast cancer each year.”

Baroness Delyth Morgan, Chief Executive of Breast Cancer Campaign, said: “We’re thrilled that some of the nation’s most well-known landmarks are joining us in highlighting the importance of breast cancer research."

Other landmarks which are taking part are the Cutty Sark, the National Theatre, HMS Belfast, Waterloo Bridge, Hungerford Bridge and the Marble Arch Fountains in London, Windsor Castle, Belfast Castle, the Tyne Bridge in Newcastle and the Gateshead Millennium Bridge, the SSE Hydro and St Andrew’s Cathedral in Glasgow, the Wills Memorial Building in Bristol, the Millennium Stadium in Cardiff, Coventry Cathedral, the Pultney Bridge in Bath and Birmingham Town Hall.