Clare McCormack, a 2013 School of Fine Art, History of Art and Cultural Studies graduate, is one of two winners of this year's £30,000 Threadneedle Prize - one of the UK's most valuable art prizes. 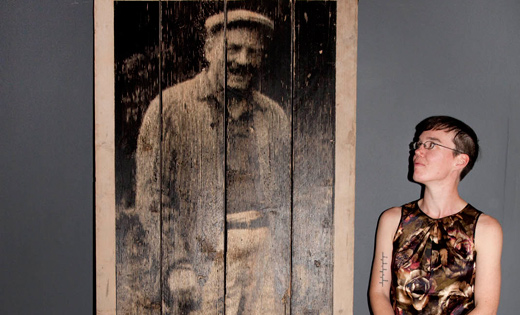 Clare's work, Dead Labour/Dead Labourer, is a woodcut portrait of her grandfather, who died of asbestosis after working on building sites for the majority of his life.  She uses scaffolding planks as the ground for her print, the rough surface acting as a symbol of the subject depicted.

Co-winner Lisa Wright’s painting The Guilty’s Gaze on the Innocent explores the embarrassment, confusion and awkwardness of adolescence and makes reference to 16th century portrait painting, possibly influenced by her two-year residency with the Royal Shakespeare Company.

Works were selected from over 3,500 entries by a panel including Dr Barnaby Wright, Curator at The Courtauld Gallery; art-critic Laura Gascoigne; and artists Paul Benney and Tim Shaw.  All the 111 works on display by 95 artists are eligible for the Visitors’ Choice Award worth a further £10,000.

Artist Paul Benney said: ”Although it’s one's singular responsibility to give full attention to every artwork submitted, it is nevertheless a pleasure to spend what amounted to about 48 hours with the panel on this decision. We arrived at something that felt right for all of us.”

Lewis McNaught, Director of the Mall Galleries, who has overseen the Prize since its inception adds: “Every year I am amazed not just by the volume but the thought provoking and high standard of entries.  We are also pleased to honour two female winners this year.  Even though works are viewed anonymously, this continues a trend with 5 out of our last 6 winners being female.”

The Threadneedle Prize is the country’s leading competition for figurative and representational painting and sculpture.  At £30,000, it is one of the most valuable art prizes in the United Kingdom.  The Prize was established in 2008 with the continued support of Threadneedle Investments, a leading international investment manager, demonstrating its long-term commitment to supporting the arts.

Through open submission from artists working in Europe, the Prize offers established and emerging artists a high profile opportunity to display their work at a leading venue in central London.

For more information and to see other entries for the prize, please visit the Threadneedle Prize website.