Akeelah Bertram and Kim Diamond have been announced as the joint prize winners of the newly launched FUAM Graduate Art Prize. 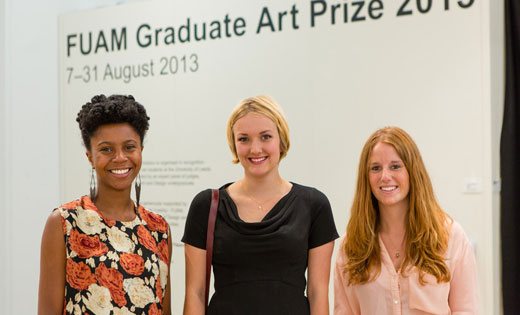 The decision was the result of a lively discussion between judges Lisa Le Feuvre (Head of Sculpture Studies at the Henry Moore Institute, Leeds), John Douglas Millar (critic and art journalist) and Professor Vivien Jones (Pro-Vice-Chancellor for Student Education, University of Leeds).

First prize winners Akeelah and Kim will be awarded £250 each, while runners up Elizabeth Charnock and Ellen Lapper will both receive £100. The prizes were presented by FUAM on 17 September 2013, followed by a conversation with the two winners and Stanley & Audrey Burton Gallery Curator Layla Bloom.

There is also a popular winner, based on votes collected from the Gallery website's e-voting feature. The winner of the popular vote is Kim Diamond, closely followed by Elizabeth Charnock. Thanks to all those that voted for their favourite artist.

The Prize is generously supported by the Friends of University Art and Music (Leeds), as well as the School of Fine Art, History of Art and Cultural Studies and the School of Design.