People in Leeds will be able to give their views on how the city council should prioritise its spending by taking part in a new consultation exercise. 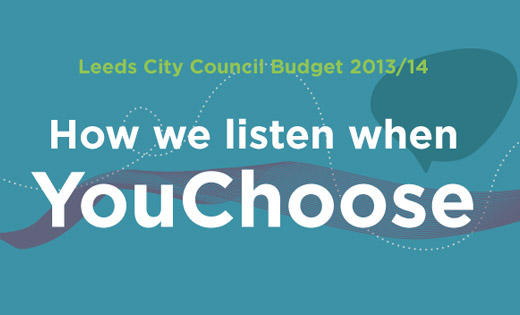 The council has today launched its annual consultation exercise which explains how the responses from more than 2,000 residents who took part last year shaped the current budget while it also looks forward to next year.

Last year’s budget consultation challenged those taking part to achieve savings of £40million as part of the council’s drive to achieve £200m of real-terms budget reductions in a three-year period to March 2014 due to grant cuts and increased cost pressures.

The new consultation reflects on the choices made last year, and asks those taking part if such decisions and priorities should remain the focus for the 2014/15 budget, where further savings of at least £36m due to government grant reductions will need to be made.

This year’s consultation will ask if those areas are still right to focus on, or whether other areas should now become priorities such as investing in the city’s infrastructure or in a stronger cultural offer.

The consultation will run until the end of September and can be completed on the council website.  Those who would prefer to complete a paper version of the challenge can do so at any council-managed library or one-stop centre in the city.

The responses will form part of the council’s annual budget review and will be taken into account when the budget is finalised in February.