Bragg on the Braggs 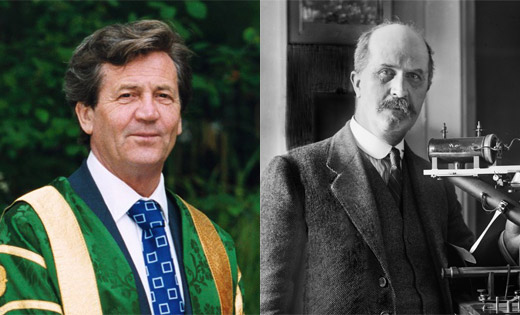 Whilst doing research for the programme, Lord Bragg discovered that he was a distant cousin of William Henry Bragg and William Lawrence Bragg, the Nobel prize winners. He visited Leeds to find out about the development of x-ray crystallography and about the research that still goes on in the University using the techniques they discovered. Melvyn interviewed Dr Tom Edwards and Dr Chris Hammond from the University of Leeds who are featured on the programme.

In 1913 the Braggs discovered a method of investigating the structure of crystals using X-ray radiation. They soon proved the significance of this breakthrough by determining the internal structure of diamond. Two years later they shared a Nobel Prize for their work, which founded the discipline of X-ray crystallography. Melvyn Bragg, a distant cousin of William and Lawrence, tells the story of their groundbreaking work. He visits the laboratories in Cambridge and Leeds where the two Braggs made important discoveries, and the Royal Institution, where they lectured and conducted research. He also learns how the Braggs' technique of X-ray crystallography revolutionised chemistry and biology, from the determination of the structure of DNA to the design of new pharmaceutical drugs.

This programme is a repeat of a programme first broadcast at 11am on Tuesday 13 August on Radio 4.