Next steps for the Leeds Trolleybus

Leeds City Council has approved the next stage of the New Generation Transport (NGT) scheme which will create a modern trolleybus service for Leeds. 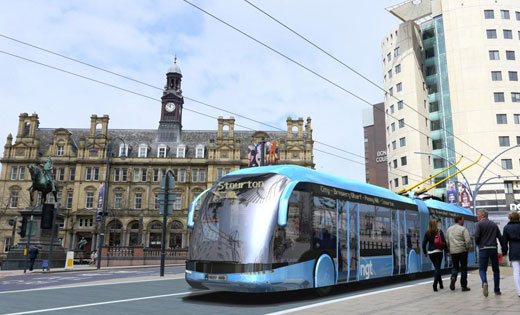 The new 14km line will run from Holt Park, down the A660 through Headingley, past the University, through the City Centre and will terminate at Stourton in South Leeds.

The £250 million NGT project will now be submitted for government approval in September with a public enquiry to be held in Spring 2014.  Subject to the various approvals required for such a complex project it is anticipated that works to construct the route will commence in 2017.

The University will be affected in a number of locations.  There will be a new Park and Ride facility for 850 cars constructed on University land at Bodington and discussions are already underway about the replacement of sports pitches that will be lost.  Land will be acquired by NGT at Lupton Flats to facilitate a bypass through Headingley avoiding the bottleneck along the A660 and greatly improving journey times.  There will be an NGT stop at the main University entrance and significant changes to traffic circulation to create a public transport and access corridor to Woodhouse Lane.  Traffic arriving at the University from the City Centre will be directed away from Woodhouse Lane and will use Blenheim Walk, which will become a two-way road.  The front of the University will be re-modelled to reflect the new access arrangements with new landscaping and tree planting.

Read more about the proposed NGT scheme and draft plans for the route.