A trio of top athletes are to be honoured by the University, with the Brownlee brothers and Paralympic swimmer Claire Cashmore amongst the famous names being awarded honorary degrees this year. 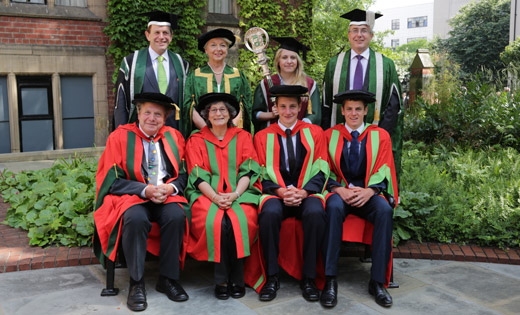 Stephanie Flanders, Samuel Kargbo, Susan Solomon, Linda Pollard and Martin Wainwright complete this year’s line-up for the annual ceremonies, taking place today and on Friday 12 July.
All of the recipients excel within their specialist fields and are distinguished by their outstanding achievements spanning the diverse fields of sport, science, journalism, public service and medicine and health.
Alistair Brownlee graduated from the University in 2010, with a BA in Sports and Exercise Science. While still studying, he qualified for the Beijing Olympics and went on to finish 12th in the triathlon. Since graduating he has been crowned World Champion on two occasions (2009 and 2010) and was 2012 Olympic Triathlon gold medal winner. The only athlete to win the world championship at junior, under-23 and senior level, Alistair trains in Leeds with his brother and is a strong proponent of the Yorkshire countryside as a first-class training ground. He will receive an Honorary Doctorate of Laws.
Younger brother Jonathan Brownlee has had a year which has seen him graduate from Leeds with a BA in History, and win bronze in the Olympics. He also recently became the Triathlon World Champion. This is an achievement which cements his earlier success at a junior level where he has won every accolade available to him including taking gold at the 2009 Australian Youth Olympics and European Junior Championships, as well as five further gold medals in the ITU World Championships Series. Jonathan Brownlee will receive an Honorary Doctorate of Laws.
Claire Cashmore graduated from Leeds in 2011, with a BA in Linguistics, and now swims for the City of Leeds Swim Club. A Paralympic swimming medallist, Claire took silver in the 100 metres and the relay at London 2012, along with a bronze in the freestyle relay. This is in addition to the bronze she took in Beijing in 2008 and two bronzes in Athens in 2004. Claire is also the holder of numerous world championship gold medals and other world records. She will receive an Honorary Doctorate of Laws.
A further five recipients who have each changed the landscape of their chosen field through their professional excellence are Linda Pollard, Stephanie Flanders, Martin Wainwright, Dr Samuel Kargbo and Professor Susan Solomon.
Linda Pollard is a successful entrepreneur with considerable experience in both the private and public sectors. She has played a significant role in strengthening links between education and health and is currently Chair of Leeds Teaching Hospitals NHS Trust. In 2004 Linda was awarded an OBE in recognition of her outstanding contribution to the community. Linda has been a member of the University Council since 1997, and became Pro-Chancellor of the University of Leeds and Chair of the Council in August 2007. She will be awarded an Honorary Doctorate of Laws.
Stephanie Flanders has made a significant contribution to enhancing the public’s understanding of economics and its impact on daily life through her current position as BBC Economics Editor, her widely acclaimed blog ‘Stephanomics,’ and her recent ‘Masters of Money’ series on BBC Two. Previously a speech writer and adviser to the US Treasury, and a journalist at the New York Times and Financial Times, Stephanie is one of the first women to hold a senior editor position at the BBC. She will be awarded an Honorary Doctorate of Letters.
Leeds-born Martin Wainwright is best known for the 37 years that he worked at The Guardian, the last 17 of which as northern editor. Martin retired from the paper earlier this year. Alongside his journalistic triumphs, Martin has been a dedicated advocate of Northern England, its culture and the countryside. He has combined his passion for ‘England’s better half’ with his joy of writing, most aptly manifested in the publication of his book ‘True North’.
More recently he has penned a tome celebrating the history and traditions of the English Village. Martin’s charitable work was recognised by the award of an MBE in 2000 for services to the National Lottery Charities Board in Yorkshire and Humberside. He will be awarded an Honorary Doctorate of Letters.
Dr Samuel Kargbo is a Leeds graduate who returned to his native Sierra Leone during the midst of a civil war to deliver drugs and basic health care to children in rebel-held parts of the country. Now the country’s Director of Reproductive and Child Heath, Dr Kargbo has made significant improvements in the care of pregnant women and under-fives in a country where poor infrastructure and poverty have resulted in some of the highest mortality rates in the world. Dr Kargbo will receive an Honorary Doctorate of Medicine.
Professor Susan Solomon led National Ozone Expeditions to Antarctica in 1986 and again in 1987. Her team made discoveries about ozone layer destruction which led to the signing of the U.N Montreal Protocol, an international agreement to protect the ozone layer by regulating damaging chemicals. Now employed at the Department of Earth, Atmospheric and Planetary Sciences at the Massachusetts Institute of Technology, she was attached to the group that was awarded the Nobel Prize for atmospheric chemistry in 1995. Professor Solomon will receive an Honorary Doctorate of Sciences.