Researchers based in the School of Music have secured an award of £570,000 from the Arts and Humanties Research Council for a project that will focus on the work of leading film composer Trevor Jones. 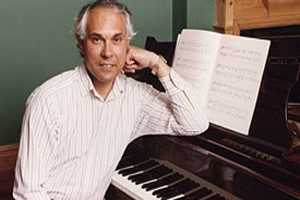 Professor David Cooper and Dr Ian Sapiro will utilise the money to organise, contextualise and ultimately share a large archive of recorded work by Jones (pictured left), whose soundtracks have featured in a string of significant movies, from Notting Hill to Brassed Off, Labyrinth to The League of Extraordinary Gentleman.

The archive of the leading South African-born composer’s work has been located in the School of Music since 2005, and the AHRC funding means that Prof Cooper and Dr Sapiro will now be able to spend the time required to manage, collate and present this significant collection over the coming years.

Professor Cooper, who is also Dean of the Faculty of Performance, Visual Arts and Communication, said: ‘We are delighted that the AHRC has recognised the value of this project to advancing scholarly understanding of the processes of film-score production, and of bringing this new knowledge to academic, professional and wider public audiences.’

Adds Dr Sapiro: ‘The archive is unique in the UK, since it contains sound recordings on a range of media from various points in the production process alongside associated documentation and musical scores. The AHRC award offers us a unique opportunity to interrogate these materials, and to work with leading British film organisations including the National Media Museum in Bradford and the British Film Institute in London, to extract maximum public benefit from the project.’