A record-breaking number of students voted last week to elect six new members to LUU’s executive team and a Leeds Student editor for the year 2013/14. 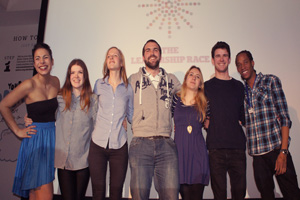 50 students ran for the seven positions which involved a period of non-stop campaigning in the two weeks leading up to the election, ending in four days of voting last week.

11,383 students voted, breaking the record for the most number of votes cast in a student election in the UK – a record already broken by students at the University in the past two years of elections.

Professor Vivien Jones, Pro-Vice-Chancellor for Student Education, said: “We have a great relationship with Leeds University Union and it’s fantastic to see that, yet again, students at Leeds have broken the British record for turnout in their election. It’s a really strong reflection of how well-engaged our students are with their education, of how much they enjoy the societies and co-curricular activities they take part in, and of how much they care about the welfare of others and the wider community of Leeds.

"This year’s LUU Officers, and the rich network of student representatives, across campus have achieved some great things in partnership with the University and I look forward to working with their successors when they begin work later this year.”

The winners are as follows:

Each position will see the elected individuals working full time to represent the student body throughout the year 2013/14.