It All Adds Up wins sustainability award

The University’s It All Adds Up energy campaign has won an award for 'Promoting Positive Behaviour' at the 2012 Green Gown Awards, which celebrate sustainability achievements in the education sector. 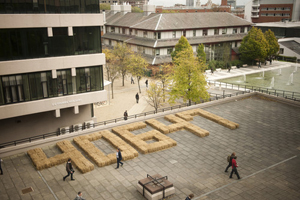 The judges commended the campaign for taking an innovative approach to a new idea and praised the way energy has been embedded as a university rather than an estates target.

Key figures from the campaign include a saving of up to £42,000 in electricity in holiday shutdown periods alone and the percentage of staff ‘very likely’ to take action to save energy has gone up from 54% pre-campaign to 90% post-campaign.

James Dixon-Gough from the Sustainable Development Team said: “Winning gives us the final set of approval for the campaign, external recognition from the sector and helps re-invigorate everyone involved for next year’s work!”