Writing from an in-between place

Award-winning Canadian writer, Professor Moyez Vassanji, will be the speaker at this year’s Arthur Ravenscroft Memorial Lecture on Postcolonial Literature, titled ‘Writing from an in-between place’. 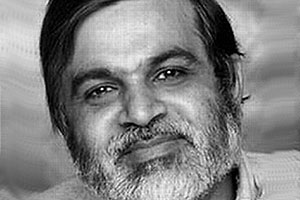 Professor Vassanji was born in Kenya and raised in Tanzania. He specialized in theoretical nuclear physics at MIT and the University of Pennsylvania before heading to Canada in 1978. From 1980 to 1989 he was a research associate at the University of Toronto, during which time he developed a keen interest in medieval Indian literature and history, and began writing stories and novels.

Moyez is the author of seven novels, two collections of short stories, a travel memoir about India and a biography of Mordecai Richler. He is twice winner of the Giller prize for best novel in Canada; the Governor General's Prize for best work of nonfiction; the Harbourfront Festival prize; the Commonwealth First Book Prize; and the Bressani Prize.

About the Ravenscroft Lecture

Arthur Ravenscroft, a much-loved member of the School of English, died unexpectedly in 1990 and, in his memory, a lecture series has been established in his name. As a teacher and critic, Arthur Ravenscroft paid special attention to writing in English from Africa, India and the Caribbean, but his interests were broad and took in many Canadian and Australian writers as well.

The Ravenscroft Lectures aim, accordingly, to represent the whole spectrum of Commonwealth and Postcolonial Literatures whose importance he did so much to establish, and which form a substantial part of the curriculum at the School of English today.