Aung San Suu Kyi is to be an Honorary Ambassador, and Lang Lang, the world famous Chinese concert pianist, is to be the Global Ambassador for the Leeds International Piano Competition. 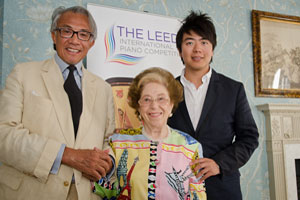 He said: “The Leeds International Piano Competition is one of the great classical music competitions in the world. It’s a tremendous advert for Leeds and for Britain as a whole. Aung San Suu Kyi’s appreciation of piano playing is well known. It is fantastic that the competition has made this tribute to Daw Aung San Suu Kyi.”

The competition’s Chairman and Artistic Director Dame Fanny Waterman said that the top prize will be named the Daw Aung San Suu Kyi Gold Medal in recognition of Daw Aung San Suu Kyi’s inspiration, courage and hope for humanity and her appreciation of piano playing, saying that “in this special Golden Anniversary Year this is the greatest honour our piano competition has ever received.”

The honour bestowed on Lang Lang is in recognition of the tremendous contribution that Lang Lang has made to classical music and the piano throughout the world since he rose to fame in 1994. He has played sold out recitals and concerts in every major city in the world and is the first Chinese pianist to be engaged by the Vienna Philharmonic, Berlin Philharmonic and all the top American orchestras.

Following his acceptance of the Global Ambassador title, Lang Lang was introduced to Dame Fanny Waterman by Sir David Tang (a supporter and major sponsor of the Competition).  Lang Lang commented: “I am a pianist performing throughout the world, and I don’t think there has been a concert hall around the globe that has not felt the impact of The Leeds International Piano Competition in the great names it has helped on their way. I am truly honoured to be associated with this tradition, and I can only say that Dame Fanny Waterman’s vision will live on as a positive force for many years to come. Thanks for the inspiration to all of us.”

Lang Lang performed at the Queen’s Diamond Jubilee Concert at Buckingham Palace this year and also in the Beijing’s opening ceremony for the Games of the XXIX Olympiad, where he was seen as a symbol of the youth and the future of China and has inspired over 40 million Chinese children to learn to play the classical piano.

The 17th Leeds International Piano Competition takes place from 29 August to 16 September 2012. Over the last fifty years, the Competition has sustained an enviable reputation for launching the successful careers of some of the world’s finest and most eminent pianists of our time.

The Competition is presented in partnership with Steinway & Sons, the University of Leeds, and Leeds City Council.

RT @UoLDisability: Do you have a burning question about disability you've been too afraid to ask? Join us online tomorrow for a special #UK…