This week the Canadian wheelchair rugby team return to the University for their pre-Paralympic training camp at the Edge. 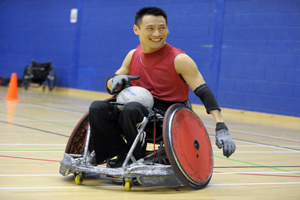 This is the third time the Canadian team have used the University's facilities, having had two previous training camps here in August 2011 and April this year. The training camp is for fifteen athletes and six officials who will be here from 22-28 August.

The sport was invented in 1977 by a group of Canadian quadriplegic athletes who were looking for an alternative to wheelchair basketball that would allow players with reduced arm and hand function to participate on equal terms.  It incorporates elements of basketball, handball and ice hockey, is fiercely competitive and extremely physically demanding.

The Canadian team will have their eyes set firmly on the Gold medal this year after taking the bronze medal at the Beijing Paralympics.